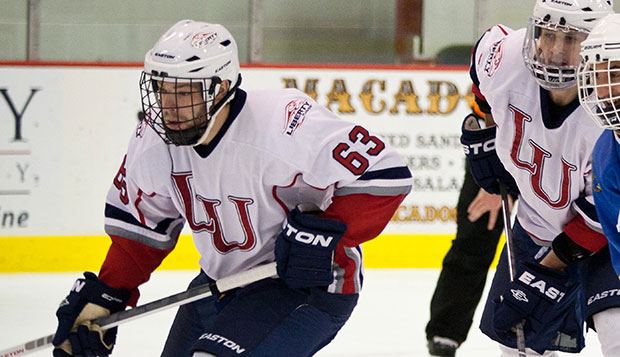 A pair of back-to back Flames goals in the second period secured a lead that proved too far for the Grizzlies to reach in the first of the teams' two-game series Friday night at Onyx Ice Arena in Rochester Hills, Mich.

Oakland, last year's ACHA National Championship runner-up and ranked No. 10 going into Friday's game, traded shots with Liberty (No. 12) for much of the first period, before the scoring started with Matt Sherry's shot from the point deflecting off Luke Baumgarten's back to earn Baumgarten the Flames goal with 5:56 to go.

Liberty's Rick Turner later took the feed from Andrew McCombe and one-timed it home on the powerplay to put the Flames up by two. With .9 seconds left in the period, Oakland's Anthony Colizza scored to put the Grizz on the board. The shots in the period were 15-5 in favor of Liberty.

The Flames came out strong in the second, with Turner earning his second goal of the game off a 2-on-1 rush with Baumgarten with 12:27 to go. Then 25 seconds later, Bram Erickson energized an already pumped-up Flames bench with another goal, widening the lead at 4-1. Liberty again took the shots in the period, 15 to 10.

The Grizzlies would not see the net for the rest of the game, allowing a shot from B.J. Pirus from the far side of the blue line late in the third to bring the final score to 5-1.

Goaltender Blair Bennett made 16 stops in the third period and had 36 for the game.

The Flames took three of four from the Grizzlies last season, but hope to end their three-game Michigan road trip with a sweep of Oakland Saturday night in Game 2. Liberty beat Davenport University Thursday night 5-3 in Grand Rapids.

With another win Saturday night, the Flames position themselves for a likely spot in the top 10 in ACHA rankings.