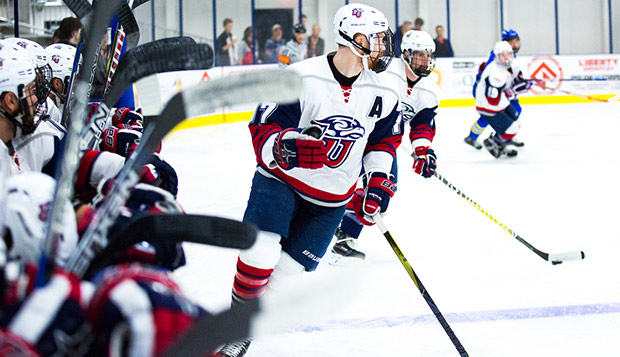 A barrage of power-play goals both ways created a high-scoring slugfest in Saturday night's ESCHL rematch between Liberty University's ACHA Division I men's hockey team and Delaware in a Veterans Day showdown at the LaHaye Ice Center.

The Flames (11-5, 10-1 ESCHL) won the special teams battle for the second night in a row, but only barely, netting seven power-play goals while giving up five on the penalty kill and allowing the Blue Hens (9-8, 5-7) to score one shorthanded goal in the 11-7 triumph.

"It was a wild game," Liberty Head Coach Kirk Handy said. "Sometimes you have to gut out those type of wins."

On its first power-play just 3:35 after the opening faceoff, junior forward Zechariah Roberts finished a perfectly placed crossing pass from senior forward Grant Garvin into the open right side of the cage, completing a play set up by Zane Schartz to ignite the Flames to a 1-0 lead.

Liberty completed its first series sweep at home since Sept. 22-23 against West Chester.

Two and a half minutes later, senior forward Tim Bierema sent an entry pass into Garvin that ricocheted off of his skate into the open cage, extending the Flames' advantage to 3-0.

Delaware trimmed the deficit to 3-1 with 48 seconds left in the first period when forward Chris Mazella punched in a loose puck that Gammer accidentally dribbled under Flames starting goalie Josh Halpenny as he attempted to clear it out from behind the cage.

The Flames pushed their lead back to three goals at 4-1 just 3:40 after the second-period faceoff when freshman forward Ryan Cox cut through the right crease and put away a short pass from sophomore defenseman Basil Reynolds off a secondary assist from freshman forward Sam Carlson.

Less than two minutes later, the Blue Hens cut the gap with a man advantage when Cole Zucker sent a pass from behind the net to fellow forward Alexander Criswell who threaded it inside the lower right post. A minute and a half later, Chris Mazzella stuck it into the left side of the net to make it a 4-3 contest.

The Flames padded the lead to 5-3 on the power play when Garvin took a pass from Roberts and skated the puck along the left end line before distributing it to sophomore forward Brock Thompson, who put it away from out in front.

At the 7:12 mark, Zucker worked the puck out from behind the cage to forward Michael Nisky for a finish from deep in the right crease to make it 5-4.

Shorthanded, Delaware forward Kevin Felice capitalized on a breakaway chance 25 seconds into the Flames' power play, knotting the score at 5-5. Handy then replaced Halpenny with junior goalie Cole Burack, who closed out the contest and picked up the win.

As in Friday's opener, Schartz netted back-to-back power-play goals to give Liberty a two-goal cushion, this time off consecutive slapshots from the same spot in the right circle. With the Flames on a five-on-three advantage, he one-timed a circle-to-circle feed from Garvin set up by Roberts top shelf with 5:43 left in the period. Then, 1:11 later, with Liberty on a five-on-four, Schartz fired a feed from senior forward Colt Steele set up by Garvin's secondary assist into the top right corner, stretching the lead to 7-5.

"Zane had a great weekend," Handy said after he scored five goals in two games. "Zane asserted himself tonight in a big way and our power play was fantastic tonight."

Less than a minute into the third period, Delaware's Nisky found forward Brian Ostrander who set up Zucker in front for a point-blank finish, cutting Liberty's lead to 7-6.

The Flames put the game out of reach by netting the next four goals. Crane lifted a sharp-angled shot top shelf off the crossbar and in off assists from Carlson and junior forward Zak Hayes, for an 8-6 advantage at the 12:40 mark.

Garvin, left open in the right circle, lifted a wrist shot into the upper netting off assists from Roberts and Schartz, increasing the lead to 9-6 with 10:07 left in regulation.

Less than two minutes later, Schartz completed his hat trick by receiving passes from Garvin and Thompson on an odd-man rush and pocketing the puck through the five hole.

Back on the power play, Liberty quickly converted when sophomore forward Victor Blomberg spotted freshman forward Jordan Bochinski with a pass from behind the cage that he one-timed from out in front for the Flames' final score. Nisky punctuated the scoring with the Blue Hens' fifth power-play goal with 1:45 to go.

Liberty outshot Delaware, 49-35, and the Blue Hens served time for 11 penalties compared to 10 for the Flames.

The Flames, already short Garrett Nelson and Chaydan Lauber, lost two more sophomore defensemen over the weekend — Josh Bergen and Matt Cruickshank, who was sidelined with a leg injury.

"It was a physical weekend and we're banged up a lot," Handy said. "We're going to have to regroup this week. I was proud of a lot of our guys. We had guys playing with different lines tonight, different defensive pairings. We only had four defensemen for most of the game so we were scrambling there at the end."

Liberty expects to have sophomore forward and head captain Josh Hamilton back in action when it returns to the road next weekend for a series at New York University, with both Friday's and Saturday's games set for 8:50 p.m. 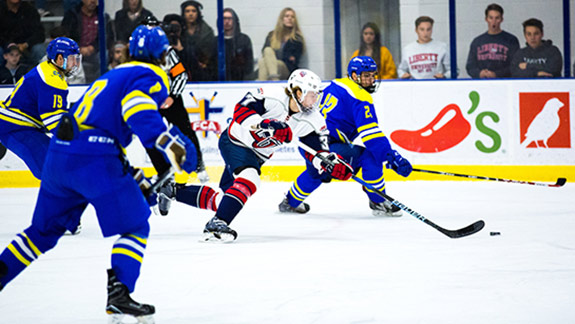