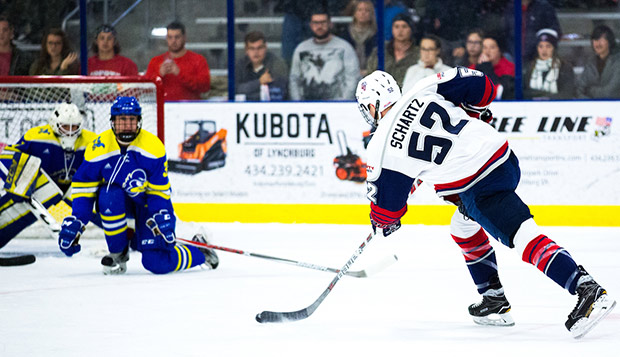 Just 37 seconds after the opening faceoff, Delaware's Dustin Rabinowitz put away a puck sent across the goal mouth by fellow forward Colin Emerich, slipping it past Flames goalie Josh Halpenny for an early 1-0 lead.

"We kind of missed an assignment there in front on the goal," Liberty Head Coach Kirk Handy said. "I actually liked their first shift and they scored on the second one, but we were able to respond quickly."

"It was a good goal to get us going," Blomberg said. "I was pretty much too tired to stand up from that shift, but luckily it went in. To score a goal for these fans, it's always fun."

"That was a nice play by Victor," Handy added. "He's been a guy who's consistently improved for us as the year's gone on and he competes every night."

Sophomore forward Victor Blomberg knotted the contest at the 12:00 mark of the first period by skating through the left circle with speed and cutting back sharply past a Delaware defenseman into the left crease before finishing a backhanded shot past Blue Hens goalie Stephen East while falling down.

Four minutes later, with the Flames on a five-on-three power play, Schartz received a cross-ice pass and one-timed a slapshot past East to lift Liberty to a 2-1 advantage.

Just over five minutes into the second period, Schartz took the puck from Halpenny and skated coast to coast — from deep in his own defensive zone up the right wing — weaving in and out of traffic before lifting an open wrist shot top shelf for a bottle-popper that stretched the Flames' edge to 3-1.

"Zane had two nice power-play goals," Handy said. "Zane has a nice shot and when he's able to get it off, it's very effective."

"To win the special teams is a big thing for us and we were able to do that tonight," Handy said. "In the faceoff circle, we did a solid job there, too, which is always important for us."

With Liberty back on the power play, Brock Thompson took a pass from fellow sophomore forward Quinn Ryan in the high slot and fired the puck into the top right corner, out of the reach of East.

Less than three and a half minutes into the third period, Flames freshman forward Jordan Bochinski chased down a long outlet pass from sophomore defenseman Jacob Fricks to create a one-on-one opportunity with East. He deked the puck in front of the goalie before tapping a backhander through the five hole to extend Liberty's lead to 5-1.

After Michael Redgate pulled Delaware back within three goals with a backhanded power-play finish from the right crease, the Flames responded just two minutes later when freshman forward Cole Gammer sent a pass to Fricks at the point. He unleashed a shot that Flames senior forward Tim Bierema deflected past East from out in front.

"Tim's a guy who's been a great player for us," Handy said. "He competes every night and wins a lot of big faceoffs for us."

Liberty nearly doubled Delaware in shots, 40-23, with Halpenny making 21 saves in net for the Flames.

"We've had a lot of offensive pressure in the last three games, so we've got the carry the momentum from tonight and from last weekend's games over into tomorrow," Schartz said.

"We worked well and we have to bring it tomorrow as well, working just as hard if we're going to get that second win," Blomberg added. "They're a good team. It's always physical and a lot of hits out there when we play Delaware, so it's fun."

The two teams combined for 29 penalties, including 16 by the Blue Hens, and both teams had a player ejected — Blue Hens forward Shane Mullin and Flames forward Ryan.

Saturday's rematch back at LaHaye is set for the same time with a 7 p.m. faceoff webcast live on the Big South Network and WatchESPN. 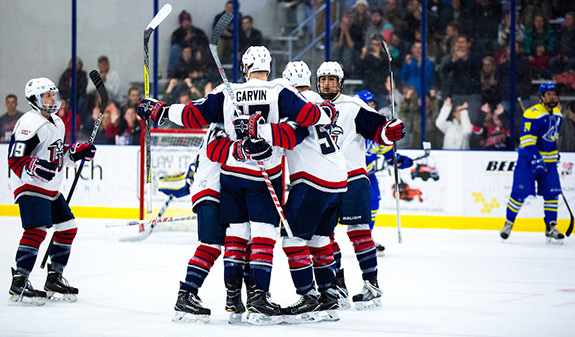