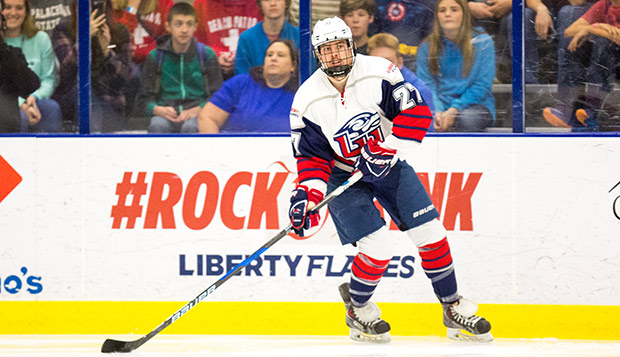 Liberty University's ACHA Division I men's hockey team, which is 4-0 on the road but only 5-5 at the LaHaye Ice Center this season, is looking to complete its six-game homestand at .500 with a sweep of Eastern States Collegiate Hockey League (ESCHL) rival Delaware this weekend.

"We're 1-3 in our last four, which is not good, and we're going to have to learn how to make adjustments here over the next weekend," Flames freshman forward Cole Gammer said. "We know (the Blue Hens) will give us good games and we're excited to see how we do in those situations. We really need those games so we're going to be doing everything we can to get two wins."

"We need to improve on a weekend that we weren't too satisfied with Saturday night's (5-3 loss to Stony Brook)," Liberty Head Coach Kirk Handy added. "It's going to be important to put some (consecutive) games together here."

Delaware dealt Liberty its last two regular-season losses in late January in Newark, Del. The Flames won their last seven games and three more in the ESCHL tournament to dethrone four-time defending champion Stony Brook in the final to enter the ACHA DI National Championships on a 10-game winning streak.

The Blue Hens won the ESCHL regular-season title last season, but didn't make the trip to Columbus, Ohio, site of the ACHA DI National Championships. They feature a new coaching staff this year, led by John Donahue, who is Delaware's third head coach in four seasons since winning their first national title in 2012.

Delaware has split three of its five series against ESCHL opponents this season — West Chester, Syracuse, and Rutgers — as well as sweeping newcomer New York University, the reigning ACHA DII national champions, and being swept by the Seawolves.

"They've got a new coaching staff in place and they seem to be playing well early," Handy said. "The guys are working hard and we're looking forward to this weekend. It's always a great rivalry. It's two big conference games and that's what's important for us."

Liberty scouting report: After splitting its series with No. 9 Stony Brook last weekend, the Flames moved up two spots in this week's ACHA DI rankings. They are in a tight race atop the ESCHL regular-season standings in the quest for this year's ACHA DI National Championships autobid.

The Flames' attack is anchored by its top line of senior alternate captain Grant Garvin — who leads the ESCHL and ranks second in ACHA DI with 11 goals and 18 assists — and sophomores Brock Thompson (12G, 11A) and Quinn Ryan (7G, 16A), who are tied for second in the ESCHL in scoring. Garvin is in his third consecutive season as Liberty's scoring leader.

In last Friday's 8-2 series-opening win over Stony Brook, Thompson and freshman forward Jordan Bochinski both netted hat tricks to ignite the offense. Garvin, Thompson, and sophomore defenseman Garrett Nelson accounted for Liberty's three goals in Saturday's rematch. Nelson was injured later in the second period and could be sidelined for the rest of the semester.

The Flames will have junior forward Zak Hayes and defenseman Kyle Crane back this weekend. Sophomore forward and head captain Josh Hamilton is still rehabilitating from a knee injury sustained in an Oct. 14 win over Syracuse but could be ready by the time Liberty travels to NYU next weekend.

Delaware scouting report: Cole Zucker, a 6-foot, 3-inch center who ranked second behind John Redgate in scoring last season, is tied for the Blue Hens' scoring lead so far this year with six goals and 12 assists. He shares the honors with Michael Nisky (4G, 14A), Delaware's assists leader, while fellow forwards Chris Mazzella (11G, 4A) and Shane Mullin (11G, 3A) are tied for the most goals. Mullin has netted the most power-play goals (six) and game-winners (four).