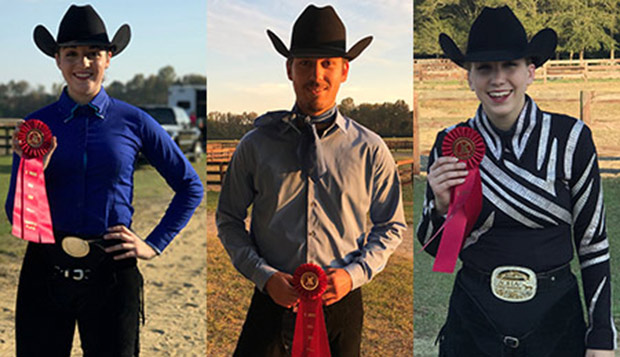 It was Bult's final competition representing Liberty's equestrian team as he will be graduating in December.

"He had an amazing semester, bringing home two first-place finishes and a second-place showing in the three competitions we went to this semester," Liberty Western Head Coach Lauren Eagles said. "Hannah Cole rode in her first-ever competition ever and had an outstanding performance."

Cole was elated after her second-place showing in her first time riding for the Lady Flames.

"Never give up on your dreams because with God, anything is possible," she said. "It's crazy to think I've wanted to compete in this sport since I was like 4 years old, and now I've finally reached my goal. Words can't even describe how blessed and thankful I am to be on this team and in this sport."

On Saturday, Liberty's Hunt Seat team traveled to the Richmond area for the third time this Fall for an event in Manakin-Sabot, Va., hosted by the University of Richmond.

"We made some mistakes, but learned a lot that will help us with our last show of the semester," Flaig said of Liberty's Nov. 18 event hosted by the College of William & Mary in Williamsburg.