Women's crew rows to bronze medal at Head of the Hooch 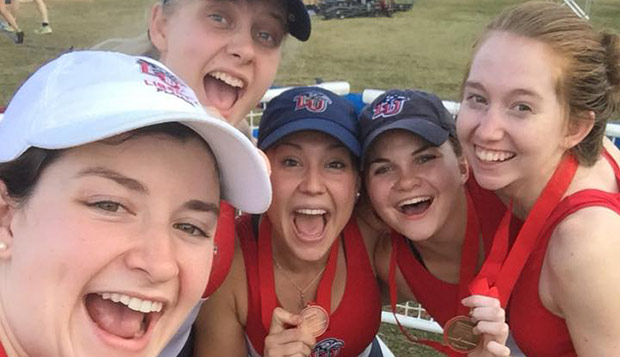 Liberty's Women's Varsity 4 crew smiles with their bronze medals after a third-place finish in Chattanooga, Tenn.

A week after getting left in the wakes of most of their competitors' boats at the Head of the Charles in Boston, Liberty University's men's and women's crew teams made some headway at Saturday's Head of the Hooch Regatta in Chattanooga, Tenn., placing 35th out of 59 teams in the Collegiate points standings.

"They did amazing," Liberty Head Coach Debbie Prowse said. "They really improved with 500-meter split times of 1:55 compared to 2:07 at the Head of the Ohio. We've really been working on power application with them, getting the leg drive first and quick catches, and they've really been doing well with their technique."

The Flames' Men's Varsity 4, also coxed by Nixon and rowed by junior Spencer Barrett, sophomores Gabe Shemeth, Ryan Krupansky, and senior Josh Elliott, finished 20th out of 58 boats in 17:56.9. Liberty's crew was less than a minute behind the first-place boat of Georgia Tech (16:58).

Liberty's Men's Varsity 8 placed 24th out of 35 boats in 17:04, improving their 500-meter split time by eight seconds from the Head of the Ohio. Junior Emma Spector was the boat's coxswain, rowed by Krupansky, Shemeth, Barrett, juniors Amanwii Kasy, Noah Palm, Bradley Weismann, senior David Jensen and Elliott, who was rowing in his final race with the Flames before graduating in December.

"They did well and have shown improvement rowing together this whole fall," Prowse said. "Josh was a great asset to the team, a really strong individual rower."

Liberty also entered a Women's Double into the Collegiate Championship race, with senior Sarah Catto and Spector teaming up to place 10th out of 14 boats in 24 minutes, 53.13 seconds, competing against an extremely challenging field.

"They showed improvement because they also raced together at the Head of the Ohio and had 500-meter split times that were two seconds faster," Prowse said.

Complete results from the Head of the Hooch, which had over 2,000 entries from nearly 200 teams, are available online.

At the Oct. 21-22 Head of the Charles, Liberty's Men's Collegiate 4 finished 38th out of 40 teams in 18:07.994, racing against a field that included Boston College, Clemson, Duke, Michigan, North Carolina, Vermont, Virginia, San Diego, and UC-Santa Barbara.

"They had a good row, but went up against some really big programs," Prowse said, noting that Liberty's Women's Collegiate 4 crossed the finish line 29th out of 35 boats in 19:45.097. "Just to be able to be a part of that historical race was a great experience for them. In a field of mostly NCAA Division I and even some international competition, they did amazingly well."

"It will be a smaller regatta with around 700 entries from 64 clubs, but it will be a nice way to end the fall," Prowse said. "We will race against a lot of competition that we'll see in the spring, including Georgia Tech, Virginia Tech, VCU, and Georgia." 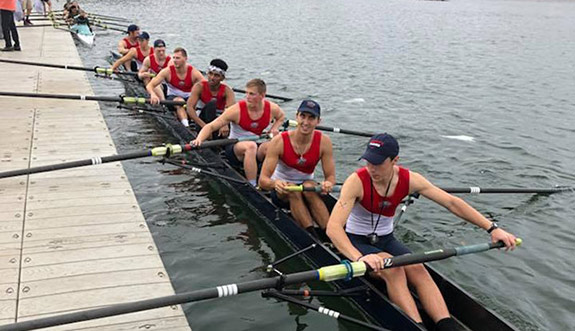