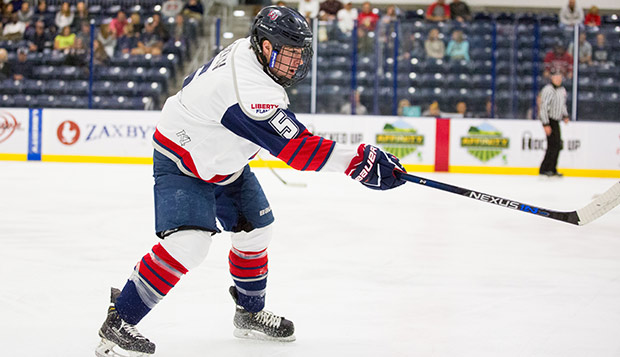 The Flames (6-2, 2-2 MACH) bounced back from back-to-back home losses to MACH North Division-leading Penn State on Oct. 20-21 at the LaHaye Ice Center with the two impressive road wins.

"Overall, it was a good weekend," Liberty Head Coach Ben Hughes said. "They were both good teams, teams that competed hard and put pressure on us. Both teams made us have to play outside our comfort zone, and pressed us to become better over the weekend. I was proud of the guys and how they battled. As both games went on, we continued getting better and better and the third periods were our best."

After Rowan (6-6) seized a 2-0 advantage 30 seconds into the second period, Liberty took advantage of a five-minute major, non-releasable penalty assessed to the Owls to net two power-play goals to tie the contest.

Lamoureux later converted the game-winner off assists from Ward and senior center Matthew Perri to lift Liberty to a 3-2 lead at the 10:28 mark before the Flames outscored Rowan, 4-1 in the third period to take complete control of the contest.

Senior forward Marshal King started the four-goal flurry unassisted with 13:03 left in the third to extend the Flames' advantage to 4-2 before freshman forward Blake Flanders scored off assists from freshman defenseman Micah Hauke and freshman forward Michael Niederer with 9:09 remaining in regulation.

Martin scored a power-play goal off an assist from sophomore defenseman and head captain Jackson Roy with 7:17 to go before Lamoureux capped Liberty's scoring with 3:55 to play on another man-up goal set up by Ward and Martin to stretch the lead to 7-2.

Liberty outshot the Owls, 40-27, and junior goalie Blake Scott made 24 saves, giving up Rowan's final goal in the closing 15 seconds. The Flames converted 40 percent (four-for-10) of their power-play opportunities and showed more discipline as the game went on, finishing with eight penalties after being whistled for five in the first period alone.

In Sunday's match at Rider (7-5), Ward scored the tying goal set up by Lamoureux and Martin on the power play with 3:40 left in the first period before Crane tallied the game-winner unassisted with 14:44 left in the second and King pushed the lead to 3-1 off assists from Flanders and senior defenseman Ryan Sidun at the 10:10 mark.

The Broncs pulled back within 3-2 with 4:41 left in the second before the Flames scored the only two goals of the third — by Ward off assists from senior defenseman Sean Bakker and Perri at 17:11 and Clark, who finished feeds from Crane and King with 5:37 to go.

The Flames are off this weekend before returning to the road to play at MACH South Division rivals Maryland on Nov. 17 and Delaware on Nov. 18.