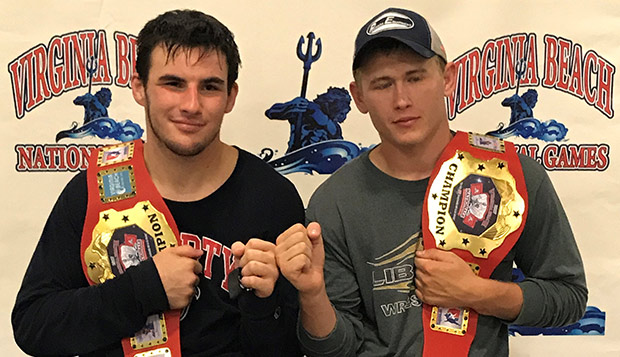 The Flames' 10 individuals combined for an eighth-place  showing at Messiah in Grantham, Pa., where they were one of only two NCWA contenders in the 10-team tournament filled with NCAA Division III programs, including the host champion. Liberty also entered seven wrestlers into the open division at Virginia Beach, where they combined to finish fifth out of 36 mostly college teams with 77 points. The Flames placed behind only Southern Virginia, which won with 192.5 points, Mid-Atlantic Conference rival The Apprentice School (169), Penn State's Club team (130.5), and East Carolina (110).

"We had an abbreviated team, but it was a really good bonding experience and the guys had a good time," said Flames Assistant Coach Chris Williamson, who traveled with the group to Virginia Beach. "While they were having fun, they did a good job of taking the wrestling part seriously and I was actually surprised. For the first tournament of the season, they looked pretty good."

Flames senior Austin Amos and finished 4-0 at 235 pounds while 184-pound sophomore Cody Richmond, who took the past two seasons off, went 3-0 as both captured titles in their respective weight classes.

"Austin may have only given up two takedowns for the entire tournament," Williamson said. "He was really efficient in scoring the whole day and had one 30-second pin in the second round."

Both wrestlers claimed title belts in their respective weight classes.

"It was good to see Cody come back and competing for the first time in two years," Williamson said. "He is working really hard with (2017 NCWA 174-pound national champion) Josh Ferenczy in the room and you could definitely see it in the match. Cody was very difficult to score on and a lot more comfortable getting into dangerous positions. He was able to score in unorthodox ways, and also followed up with technically sound and fundamental ways, too."

"He made some good adjustments throughout the day," Williamson said. "Even guys who were losing made good adjustments. The guys are working at an unbelievable level compared to the past couple of years. I love where we are right now and it's going to be a really fun season to watch."

He predicted the Flames, who placed behind complete teams from regional rival Southern Virginia and The Apprentice School, a Mid-Atlantic Conference opponent, would rise up the NCWA rankings rapidly after entering the season at No. 8.

"Those are going to change really, really quickly," Williamson said. "I'm sure we're going to be ranked first or second in a matter of weeks."

At Messiah, Liberty sophomore Joseph Scott wrestled up to his second seed at 165 pounds. He received a first-round bye before earning a 12-3 major decision over Gettysburg's Austin Roskos. He then scored a 13-0 major decision over Lycoming's Kyle Bennett before advancing to the finals with a 23-7 technical fall over Bennett's teammate, Kevin Keppler. There, Scott met top-seeded Jeff Hojnacki of host Messiah and came up just short of an individual title, dropping a 5-4 decision.

Senior captain Taylor Westlake also reached the semifinals at 197 and finished sixth. He won his first two matches, pinning Messiah's Roman Wagner in 1:10 and scoring an 8-2 decision over Elizabethtown's Nick Savin before being tech falled by Messiah's top-seeded Kyle Koser, 16-0, and losing a 5-2 decision to a third Messiah opponent, Karrington Washington.

At 174 pounds, Liberty sophomores Luke Ely and Samuel Karel both won their first two matches to make it to the semifinals before Karel wound up scoring a 6-4 decision over Ely in the consolation final for third and fourth place.

Heavyweight Dominick Johnson placed fourth for the Flames after advancing to the semifinals with a bye, a pin of in Ursinus' Theo Vlahos in 5:54 and a 4-3, double-overtime decision over McDaniel's Brendan Woody. Johnson then faced top-seeded Paul Triandafilou and came up on the short end of a 3-2 decision. In the consolation bracket, he defeated Messiah's Dan Kiser, 5-1, before losing a 3-1 overtime decision to Gettysburg's Anthony Puca, 3-1, in the third-place bout.

Next Saturday, Liberty's complete team will travel to the Ursinus Open outside of Philadelphia.