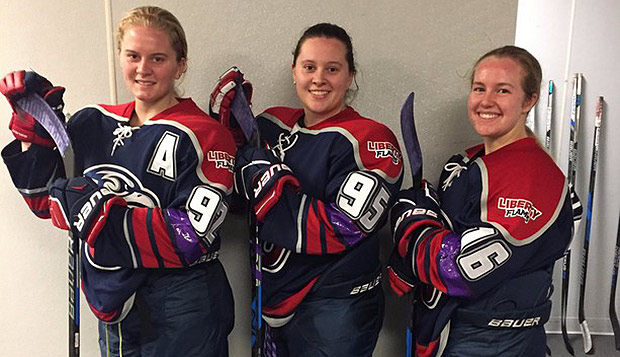 Liberty University's No. 1-ranked ACHA Division I women's hockey team extended its winning streak to 13 games early Sunday morning against Penn State, in its third and final game of the UMass Showcase at the Mullins Ice Center in Amherst, Mass.

Liberty outshot Penn State, 65-11, including 27-0 after the first period and 38-5 after the second, with Lady Flames junior goalie Kelly Hutton making 10 saves.

"The last minute and a half we just had a little mental lapse," Liberty first-year Head Coach Chris Lowes said. "We would have loved to have kept the slate clean and have gotten Kelly another shutout. Our goal is to stay focused and play consistently, regardless of the score, but our team has bigger goals than just individual stats and shutouts."

The Lady Flames got goals from eight different players in their third lopsided victory over the Ice Lions (0-7) this season.

Dana McLeod started the scoring with a slapshot from the blue line off assists from fellow sophomore defenseman Emily John and forward Tiana Lisle midway through the first period. Senior forward Chelsey Greenwood doubled the lead with her finish of a feed from sophomore forward Aly Morris with 3:45 left in the opening stanza.

Alex Smibert made it 3-0 just 3:34 into the second period off assists from fellow sophomore forwards Vanessa DeMerchant and Deena Birney before junior forward Lauren McDonald put away a pass from freshman forward Shannon Fehr 3:12 later for a 4-0 advantage.

Sophomore forward Mackenzie Carroll padded the lead to 5-0 with a beautiful shot assisted by freshman forward Shelby Bradford and John with 8:55 left in the second period before Lisle extended the edge to 6-0 just 22 seconds later off feeds from sophomore defenseman Rachel Gibson and Morris.

Gibson stretched the lead to 7-0 five minutes later with a power-play goal assisted by Bradford and Carroll before sophomore forward Shelby Burden capped Liberty's scoring off an assist from Lisle.

Liberty finished 3-0 in the weekend Showcase, starting with shutout wins over No. 11 Rhode Island on Friday and the sixth-ranked host Minutewomen on Saturday.

"It was another good three-game weekend road trip," Lowes said. "We are happy with the on-ice growth and where we are as a team. We've done everything we need to, playing a lot of teams on the cusp of going to (ACHA DI) Nationals with Colorado last week and UMass and R.I. this week. We're continuing to try to improve as a team and step forward in our evolution. We have a vision for where we want to be a month into our season and where we want to be in March and we're doing everything we can to get there."

Liberty has played 11 of its past 13 games on the road and only has eight ACHA home games this season — four this Fall semester, including Oct. 14-15 shutouts of Penn State, and four more after the New Year.

"We've traditionally been the team that's farthest from their home rink so we're prepared for life on the road and what it entails," Lowes said. "It's the reality of where we are in the country and what that geography looks like. We're just a bit on an island. It's just the way the schedule worked out that this was our year to travel."

After an off weekend when many of its players will attend Friday's funeral in Aurora, Ontario for Sarah Stevenson — an All-American forward on the Lady Flames' 2015 ACHA DI National Championship team — Liberty will travel to Michigan to face the 10th-ranked Wolverines and No. 2 Adrian on Nov. 16-17.

The Lady Flames will return to the LaHaye Ice Center to host ninth-ranked Grand Valley State on Dec. 1-2.