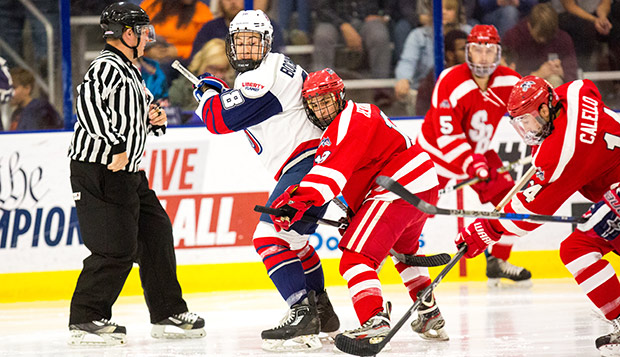 The Seawolves' only loss this season came in overtime in a series split with No. 11 Ohio, which swept two one-goal games at Liberty last weekend.

"Stony Brook's a good hockey team and they're someone who we battle with all of the time," Liberty Head Coach Kirk Handy said. "I'm proud of our guys. It was all about our guys' effort tonight, the way they played and competed. They played hard for 60 minutes."

Hat tricks by Flames freshman forward Jordan Bochinski and sophomore forward Brock Thompson accounted for the final margin of victory in the battle between the top two teams in the ESCHL.

"Both of those lines were going tonight," Handy said. "I'm real proud of (senior forward Grant) Garvin's and (sophomore forwards Quinn) Ryan's and (Brock) Thompson's line. I challenged them a bit this week and they responded really well. They're talented players and they led us offensively big-time tonight."

Prior to the singing of the National Anthem, the crowd, full of guests for Fall Family Weekend and a Word of Life event, observed a moment of silence in memory of former Lady Flames forward Sarah Stevenson, Liberty's all-time assist leader and a key member of its 2015 ACHA DI National Championship team who died earlier this week in her homeland of Canada.

Liberty (9-4, 8-1 ESCHL) opened the scoring with a beautifully executed give-and-go between Thompson and Ryan on a two-on-one break started by sophomore defenseman Matt Cruickshank. Thompson, skating through the right circle, dropped the puck back to Ryan in the left circle, where he drew the defenseman and goalie toward him before sending a return pass to Thompson near the right post, where he slammed it into the open right side of the net.

Stony Brook (9-1-1, 6-1) capitalized on a power play to net the equalizer after Ryan was called for a delay of game on the second second-period faceoff. Seawolves forward Brendan Calello lifted the putback of defenseman Brendan Pepe's slapshot from the point past Flames junior goalie Cole Burack into the upper netting just nine seconds after the ensuing faceoff, tying the contest at 1-1.

Liberty reclaimed a 2-1 edge after a Stony Brook turnover in its defensive zone, when Bochinski fired in a wrist shot from the left circle top shelf past Seawolves goalie Payne Yoder off assists from fellow freshman forward Cole Gammer and sophomore forward Victor Blomberg.

After a long clear by sophomore defenseman Jacob Fricks along the left boards, Thompson extended Liberty's lead to 3-1 at the 9:24 mark by stealing the puck from Yoder behind the net and sticking a wraparound off a Stony Brook defenseman into the open cage.

Moments later, with Liberty on the power play, Blomberg jammed a rebound of fellow sophomore forward Garrett Nelson's shot from the left wing under Yoder's pads in a scrum in front of the cage for a 4-1 Flames advantage with 7:44 left in the second stanza.

"Vic stepped in and played really well for us tonight," Handy said. "He's been a guy who's gotten better every night out. It's his compete level. He competes every time he's out there and that's been big."

After starting the second period on a four-on-four, Liberty killed back-to-back power plays with Burack making a diving save of Pepe's open shot in the right crease on the first. Immediately after completing the second PK, Bochinski padded the Flames' lead on a breakaway, finishing his shot from deep in the right crease. The puck flipped up and over the right pad of Yoder, who tried to swipe it out of the cage with his stick a split second too late.

Garvin, the leading scorer in the ESCHL who is also tied for second in points among all ACHA Division I players, received Thompson's short feed from along the right back boards and one-timed a slapshot into the upper netting. That stretched Liberty's advantage to 6-1 and ended the night for Yoder, who was replaced by Rob Lockwood for the final 11 minutes of action.

After Stony Brook got one goal back on Pepe's shot from just inside the red line, the Flames capped the scoring with two goals in the final 1:25, when Garvin dug the puck out of the right corner and sent a cross-crease pass to Thompson, who completed his hat trick with a one-timer in the slot.

Just 44 seconds later, Liberty showcased selfless passing and polished execution on an odd-man rush, with Blomberg and Gammer setting up Bochinski's second score in the right crease with 41 seconds to go.

Liberty outshot Stony Brook, 35-28, with Burack making 26 saves to improve to 5-2. The Flames were called for eight penalties to the Seawolves' six with both teams converting one power-play goal.

"I thought we were pretty smart physically tonight," Handy said. "We weren't going all over the place. We played hockey and that's good to see. Hats off to our guys. They played well tonight and we're going to have to play even better (in Saturday's 7 p.m. rematch). Stony Brook's a solid opponent, and they'll come back ready to play. Our challenge is to continue to build on tonight." 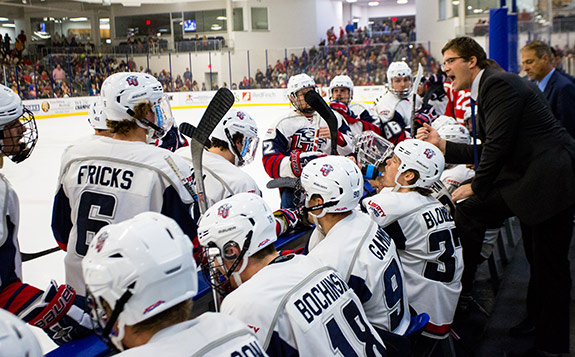