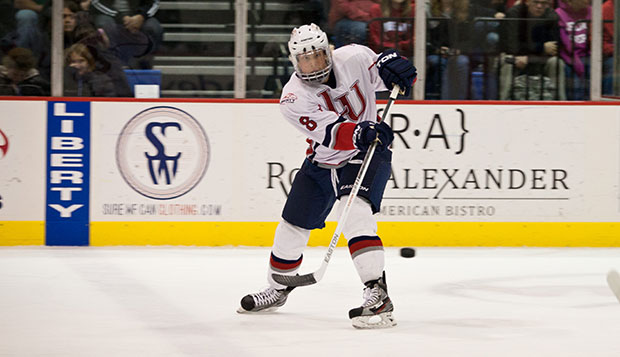 After two evenly matched frames, the Liberty Flames Division 1 men's hockey team put on the pressure in the third to skate away with a 5-3 victory in the last of a three-game series with the Panthers of Davenport University Thursday night in Grand Rapids, Mich.

The Panthers got on the board first with a goal by Matt Ogden at the 5:20 mark, but Liberty capitalized off a turnover from Panthers netminder Phil Graveline as Luke Baumgarten intercepted a pass and backhanded it home to bury it in the back of the net, tying the game at 1-1 at the end of the first period.

The middle frame saw more points on the board for Liberty, with the Flames cashing in on Rick Turner's goal on the breakout, assisted by Steven Bellew and Andrew McCombe, firing into the high slot at 4:23 to pull away with a one-goal lead. It was Turner's 40th point earned in 20 games.

Bram Erickson then scored on an unassisted goal to put the game at 3-1.

The Panthers made a comeback late in the second, scoring two unanswered goals to lock the game at 3-3 going into second intermission.

Offensive pressure picked up at the beginning of the third, with Liberty's Andrew McCombe burying it in the net on a rush, with assists from Lindsay LeBlanc and Ryley Egan at 1:01. The Flames would keep the Panthers at bay for the rest of the game, with McCombe securing the final two-point lead by finding an empty net with just less than 30 seconds to go.

Liberty blocked eight shots in the final period, with goaltender Blair Bennett making 10 saves for a game total of 47.

The victory comes after a sweep by the Panthers, 2010-2011 ACHA Division 1 national champions, at Liberty in October, giving Davenport rights to the newly inaugurated Blue and Gray Cup, a trophy the two teams will now compete for annually in a best-of-three format. The cup celebrates their rivalry and the historical one between Michigan and Virginia dating back to the Civil War.

Liberty, ranked No. 12 going into Thursday's game, improves to 11-8 on the season and will take on No. 10-ranked Oakland University in the first of a two-game series Friday night at Onyx Ice Arena in Rochester Hills, Mich.