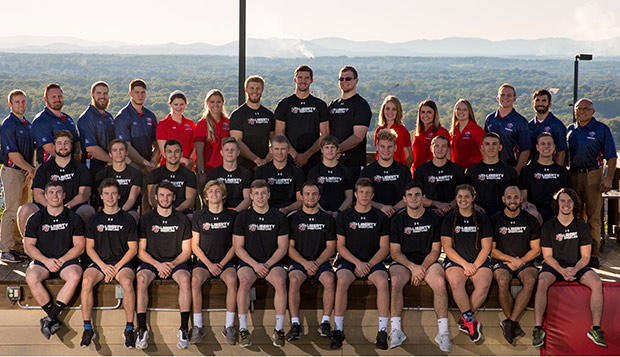 Liberty University's men's wrestling team, which finished runner-up to Emmanuel College in both the NCWA National Duals in Lynchburg, Va., and the NCWA Grand Nationals in Allen, Texas, last season, opens its 2017-18 competitive schedule on Saturday.

In the preseason rankings, Liberty only debuted at No. 8 in the NCWA Division I team rankings, with Central Florida ranked No. 1 and defending champion Emmanuel projected third.

The Flames only have five wrestlers ranked in the top 10 in their respective weight classes — all at 184 pounds and above — giving them plenty of motivation to move up the ranks both individually and as a team.

"We only have 25-27 wrestlers, so it's actually probably one of lowest we've had in terms of numbers, but I really like the quality," Castro said. "We've got some good upperclassmen, setting a good pace. We're looking for leadership from Taylor Westlake, a returning captain, Dominick Johnson at heavyweight, Austin Amos at returning All-American at 235, and Josh McIlhenny, who wrestled behind (NCWA national champion) Josh Ferenczy last season at 174."

Senior Austin Amos (seventh at 235) and sophomore Ashton Robinson (10th at 133) are also ranked in the top 10. The Flames feature an influx of talented freshmen who are contending for starting spots right away, especially in the lower weights where the lineup was thinnest last season.

"I feel really good," Johnson said. "We've got a lot of really talented young guys coming in. As long as everyone does what they're supposed to and continues working like we've been working, we can have an All-American at every weight, and we stand a really good shot at the championship this year."

Due to the demolition of its Wiseman Wrestling Room to make room for the expansion of Williams Stadium, Liberty did not hold its annual Jacob's Challenge 24-hour training marathon this preseason. But the Flames definitely pushed themselves in practices, starting Sept. 20 on mats set up in temporary facilities on the second floor of the former Macy's building at River Ridge Mall, as well as in workouts led by Club Sports Strength & Conditioning Coordinator Chris Kerr, and team bonding exercises on the challenge course led by staff at the Hydaway Outdoor Recreation Center.

The Flames will again host the NCWA National Duals, Jan. 26-27 at the LaHaye Ice Center, with six mats set up on top of a cover placed over the ice, and will again have home-mat advantage when they contend for their seventh consecutive Mid-Atlantic Conference tournament championship on Feb. 24 at the LaHaye Multipurpose Center.

Last year, Liberty sent 16 wrestlers to nationals based on top-six showings at the MAC tournament. If the NCWA preseason rankings are accurate, the Flames could be challenged to match that number of qualifiers and extend their streak of supremacy in the conference with MAC members Middle Tennessee (ranked second) and The Apprentice School (seventh) projected to finish ahead of them.

"That's more of a challenge that guys are excited about this year," Johnson said. "I don't feel like anyone's really anxious. They're just excited to get another crack at it and show everyone that we deserve to be No. 1. Last year, we were seeded fourth starting the season and we came back and took second. We're starting out better this season and we stand an even better chance to take the title."