Flames set to host Seawolves in rematch of ESCHL final 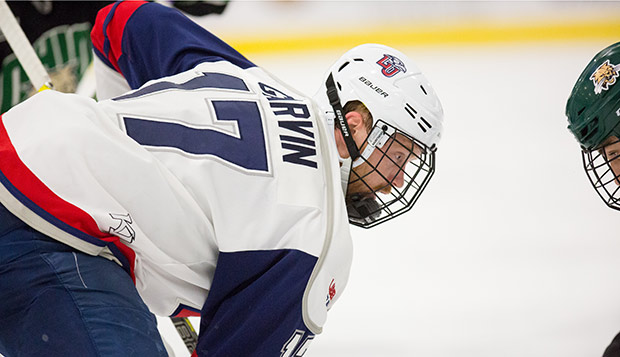 Senior forward Grant Garvin ranks first in the ESCHL and tied for second in ACHA Division I in scoring. (Photo by Andrew Snyder)

Going into this weekend's home series against Stony Brook, the ninth-ranked team in the ACHA and first-place team in the Eastern States Collegiate Hockey League (ESCHL), the Flames are still very much in the hunt for the ESCHL regular-season title and automatic bid to the ACHA DI National Championships, set for March 8-13 in Columbus, Ohio.

Last year, in its first season in the ESCHL, Liberty advanced to nationals after dethroning the four-time defending ESCHL tournament champion Seawolves in the title game.

"It will be a great battle this weekend," Flames Head Coach Kirk Handy said. "We will get focused this week in practice and we are looking forward to it."

Saturday's encore matchup will be a Military Appreciation Night and will kick off Liberty's upcoming Military Emphasis Week (which runs through Nov. 11) with free tickets available for service members and veterans available upon request (email militaryoutreach@liberty.edu for more information).

There will be a special pre-game ceremony honoring the U.S. military at 6:45 p.m. and competitions between representatives of different branches of the military on the ice between periods.

The Flames will don new patriotic red, white, and blue uniforms for the contest, three of which will be sold by silent auction bids accepted through the end of the second intermission.

Scouting Preview, Games 13-14: No. 9 Stony Brook (9-0-1, 6-0 ESCHL) at No. 14 Liberty (8-4, 7-1 ESCHL), Friday (7 p.m.) and Saturday (7 p.m.) at the LaHaye Ice Center. Both games will be webcast live by the Liberty Flames Sports Network (LFSN) with coverage carried on the Big South Network and ESPN3/WatchESPN, after Liberty worked out a contract last month to stream all of this season's home games on that network.

Cole Gammer got on track offensively in this past Saturday's 4-3 loss to the Bobcats, scoring the only two goals in the third period to get the Flames back in the game. Gammer (5G, 6A) moved ahead of fellow freshman forward Jordan Bochinski (3G, 6A) into fifth place among Liberty's scoring leaders, behind junior defenseman Zane Schartz (4G, 12A).

Stony Brook scouting report: The Seawolves have climbed to No. 9 in the ACHA DI rankings and are in first place in the ESCHL standings at 6-0 after sweeping series against conference foes Rutgers, Rhode Island, and Delaware, winning five of those games on their home ice at The Rinx. Stony Brook also split two overtime matchups against Ohio in Bird Arena, winning the Oct. 21 rematch when leading scorer Bradley Riccardi (7G, 5A) netted the game-winner 15 seconds into the five-minute extra period.

Other double-digit scorers for the Seawolves are fellow forwards Kevin Murphy (5G, 6A), Ori Benyamini (4G, 7A), and Joey Slevin (3G, 8A) as well as defenseman Brendan Pepe, who has distributed a team-high 10 assists.

All-time series: Liberty, which dethroned the four-time defending champion Seawolves in last season's ESCHL Tournament final, still leads the series with Stony Brook, 21-13-3, even after losing eight of its past nine regular-season matchups.