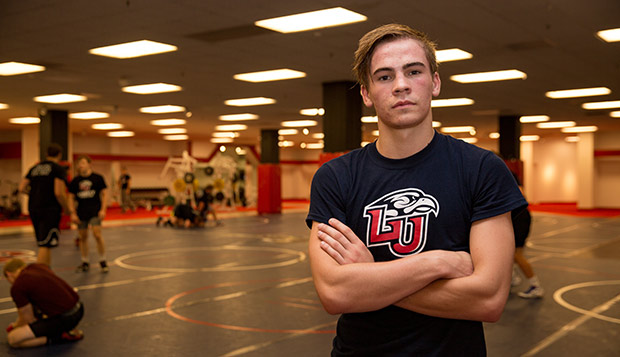 Former Flames NCAA Division I and II 142-pound wrestler Warren Stewart — Liberty University's first NCAA national champion in any sport — remembers how his life was transformed when he arrived on the underdeveloped Lynchburg, Va., campus as a transfer from Lock Haven (Pa.) University in 1987.

"Prior to coming to Liberty, I was struggling in every area of my life," Stewart said. "I was incapable of being disciplined in any area — sports, academics, lifestyle. I remember praying, ‘Lord, help me.' That was an honest and sincere prayer and … it was a God thing, quite miraculous that I ended up at Liberty."

"I came down to Liberty and it was like I was drinking this fresh new water," Stewart said. "Having someone like Jesse as a friend, having that kind of influence around me, I was on Cloud Nine. Walking into that (1988 NCAA Division II) national tournament (in Omaha, Neb.), it was almost like a dream world. I was winning everything. It was dynamically different from even six months before. It was amazing."

Stewart, who qualified for nationals at the NCAA Division I level in each of his last three years at Liberty, served as an assistant to Shuler for nine seasons at Brookville High School in nearby Campbell County before becoming the Bees' head wrestling coach in 2015.

He has coached all five of his sons in the sport, including Flames freshman 141-pounder Reid Stewart — the fourth in line and first to follow his father's path to Liberty.

"I couldn't imagine a better story for him," Warren Stewart said of Reid's decision to wrestle for the Flames. "What a great opportunity for him to be around Coach Castro and the staff he has."

Warren Stewart drilled the sport into his five sons at an early age, signing Reid up to compete for Castro's Liberty Gold Wrestling Club team when he was in second grade.

"For me as a dad with five boys to raise, I realized wrestling was very, very helpful as a tool for discipleship, developing character for our kids and helping them to become men," he said.

Reid is also the first of his siblings to win a Virginia High School League state championship, accomplishing that feat twice at Brookville — as a freshman at 106 pounds and a junior at 120. Older brothers Zeb, who competed at VMI, and Luke, now a junior 141-pounder at NCAA Division I Campbell University, were both runners-up to four-time state champions who became NCAA DI All-Americans.

Reid Stewart considers his father, Castro, and Shuler his greatest inspirations in the sport.

"Coach Castro has had a large influence on me," Stewart said. "It's nice to have people of that caliber, to be able to look up to them as I develop my wrestling career."

Stewart's older brother Eli went to Ohio Valley University, an NCAA DII school in West Virginia where he now serves as a graduate assistant, and his younger brother Hudson is a sophomore at Brookville.

"Eli and me are taller and lengthier, so we usually use that to our advantage," Reid Stewart said. "The other three (Zeb, Luke, and Hudson) are more stocky, so they're more explosive and quicker."

"They're all completely different both personality-wise and as wrestlers," Warren Stewart added. "No two of them are the same. Luke wrestles the most like me. Reid has his completely own style."

Reid Stewart missed his senior season at Brookville due to injury, but has recovered and is ready to overcome any obstacle in his path.

"The goal is always to do my best, going 100 percent whenever I'm training and getting on the mat and pursuing whatever goals I've set out for myself," Stewart said. "This year, I'm keeping in mind my injuries, working around them while doing my best."

He has built up his strength in the weight room and sharpened his techniques on the mat by sparring with his new teammates.

"I'm excited about training with these guys in the wrestling room and being able to grow with them," Stewart said. "It's definitely going to challenge me. The first couple of matches are going to be a real eye-opener to kind of show me what college has to offer."

Stewart has aspirations to add to his father's legacy by becoming an NCWA national champion as a freshman this coming Spring. However, Stewart doesn't consider winning every match the ultimate goal as much as glorifying God by using the gifts He has given him and showcasing the skills he has developed on the mat.

"If you try to put excess amount of weight on every match, it stresses you out and can negatively affect how you wrestle," Stewart said. "The way I've always approached it is just taking one step at a time and loving the sport and having fun while I'm doing it. I just have the confidence that I've trained hard and know that's all that I can do."