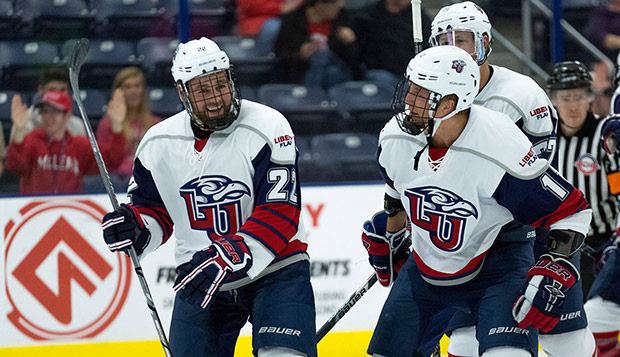 Liberty starts a one-year contract with the online sports site this month to air hockey games. Flames Football as well as Liberty Men's and Women's Basketball and Baseball are already airing on the network.

This platform is in addition to online coverage of the hockey games by the Big South Network, expanding exposure for Liberty's thriving Club Sports program throughout the United States and around the world.

"The students who are involved with our broadcasts do a fantastic job, working with the leadership of LFSN (Streaming Producer Matthew Byrd, Executive Producer of Broadcast Operations Kevin Keys, and Sports Anchor Rett McGibbon, and SCDC Dean Dr. Bruce Kirk), in bringing world-class coverage of our games," Liberty DI men's hockey Head Coach Kirk Handy said. "It's neat not only from our team's perspective, and the university's perspective, but for the students. The Club Sports program is providing our students — not only our student-athletes — great résumé-building opportunities to enhance their future careers. To be able to say that they have been working on WatchESPN broadcasts is fantastic."

Liberty's DI men's hockey team is currently ranked No. 13 in the country and faces the No. 11-ranked Bobcats on Friday and Saturday.