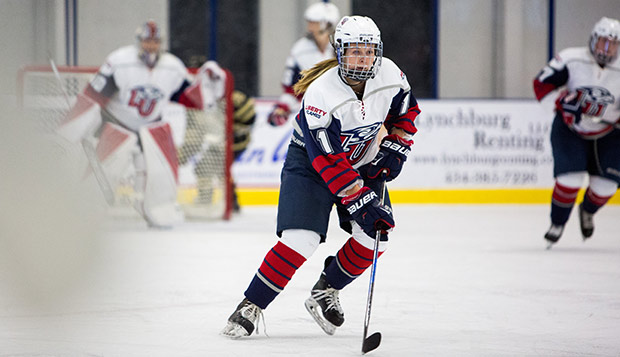 Liberty sophomore forward Deena Birney skates the puck out of the defensive zone in a game at the LaHaye Ice Center. (Photo by Andrew Snyder)

For the second night in a row, Liberty University's top-ranked ACHA Division I women's hockey team overcame an early deficit to conquer No. 8 Colorado on its home ice. The Lady Flames completed a two-game sweep by winning Thursday's rematch by a 4-2 count at the CU Recreation Center Rink.

"They're a good team but we played well," Liberty Head Coach Chris Lowes said. "They're fast, they're dangerous."

The Lady Flames matched Colorado at even strength, and their two power-play goals proved pivotal, with the last by senior forward Courtney Gilmour with 8:34 left in the third period.

Gilmour put away assists from freshman forward Shelby Bradford and sophomore forward Alex Smibert just 11 seconds after the Buffaloes' Leah MacArthur was ejected for a body check that sent Liberty senior forward Chelsey Greenwood to the ice and later the hospital with neck and back injuries.

"(Senior defenseman) C.J. Tipping was injured yesterday and she's going to be out indefinitely after being hit by the same player," Lowes said. "They're a good team and they're fast and physical. Injuries certainly are a sign of a physical game. It's part of the game, though there are some that are avoidable. We're thankful for the depth of talent that we have."

"Nadia made a couple big saves, including one crucial stop on a breakaway," Lowes said.

Maura Keift, the second-leading scorer in ACHA Division I with 23 points, netted the equalizer less than a minute later and the score remained at 1-1 for the ensuing 20 minutes before Kathleen Ash, the top scorer in the league with 24 points, finished a feed from Morgan McIver to give the Buffaloes a 2-1 lead.

But once again, the Lady Flames responded, knotting the contest at 2-2 just 3:19 later on a goal by Gibson seconds after Colorado had killed off another penalty. Sophomore forward Vanessa DeMerchant and McDonald, who moved into a tie with MacArthur for the ACHA's third-leading scorer (17 points apiece), contributed the assists.

With just eight seconds remaining in the second period, Gilmour got the game-winner off Smibert's first assist, giving the Lady Flames a 3-2 advantage going into the third.

"This was a very big sweep for us on the road, very similar to our sweep of (No. 4) Lindenwood-Belleville (Oct. 6-7 near St. Louis)," Lowes said. "We were very fortunate to come away with two wins. We are happy with where we're at. We're still undefeated (in the ACHA) and maintained our streak and a win at Colorado State (Friday night) should keep us at the No. 1 spot. We're excited to return home 3-0."

The Lady Flames plan to unwind on Friday at Estes Park before battling the Rams at 10:15 p.m. (Mountain Standard Time, 12:15 a.m. EST) in Fort Collins, Colo. This is Liberty's third road trip in four weeks and the team has two more before the end of the Fall semester — next Thursday through Saturday at Massachusetts and Nov. 16-17 in Michigan.

"We have another big series next weekend, a showcase event," Lowes said. "It's good for us to be playing in these three-game series in preparation for the (ACHA national) playoffs."