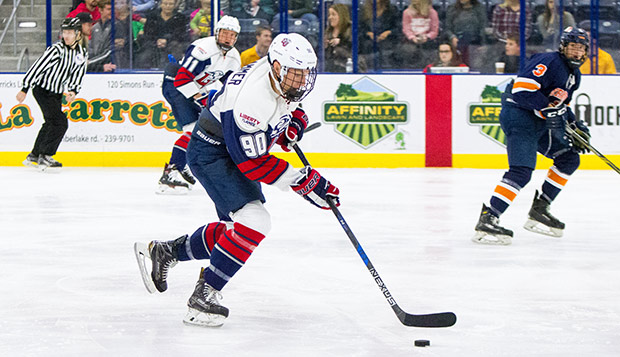 Liberty University's ACHA Division I men's hockey team opens a three-weekend homestand against one of its biggest nemeses this Friday and Saturday night when Ohio visits the LaHaye Ice Center.

The Bobcats have won the past nine meetings with the Flames, including a 5-2 setback in the first round of the 2015 ACHA DI National Championships in Cleveland. That was two years after Ohio after ousted the Flames by a 7-4 count in the second round of the 2013 national tournament in Chicago.

Liberty Head Coach Kirk Handy is confident his players can snap that streak this weekend.

He has noticed continued progress and been pleased with the Flames' responses after losing their season-opener to Alabama on Sept. 15 and Syracuse on Oct. 13.

"I love this group of guys," Handy said. "They've been working hard and we're improving. We want to get better every game we're out there and continue to build and grow as a team."

"They're a strong team and they play hard, so we're going to have to be ready," Bergen said. "They're definitely the toughest team that we've played so far this season, so it's going to be good for the younger guys to get that kind of exposure and it will be a challenge and a good prep for nationals."

Bergen said the Flames will need to clear the puck out of their defensive zone quickly to spark their fast-break attack.

"We definitely have one of the quickest offensive corps," he said. "All four of our lines move fast, get it in and they go to work, so that's going to be to our advantage if we can make stuff happen with our speed going into their end."

Friday's first game is a Kids' Night, with fans 12-and-younger in costume invited to go trick-or-treating at the 10 suites on the concourse level of the LaHaye Ice Center before the opening faceoff and at both intermissions. The first 500 kids will also receive free plastic sandwich containers with the Flames logo, sponsored by Domino's Pizza.

Scouting Preview, Games 11-12: No. 11 Ohio (6-2-1) at No. 13 Liberty (8-2-0, 7-1 ESCHL), Friday (7 p.m.) and Saturday (7 p.m.) at the LaHaye Ice Center. Both games will be webcast live by the Liberty Flames Sports Network (LFSN) with coverage carried on the Big South Network, as well as on ESPN3/WatchESPN through a new contract established this season for all home hockey games.

Liberty scouting report: After sweeping Rhode Island last weekend to improve to 4-0 on the road, Liberty moved back up two spots to No. 13 in this week's ACHA DI rankings. The Flames' top three scorers are linemates — senior captain Grant Garvin (9 goals, 15 assists) and sophomore forwards Quinn Ryan (7G, 15A) and Brock Thompson (8G, 9A), followed closely be junior defenseman Zane Schartz (4G, 12A). Freshmen forwards Cole Gammer (3G, 6A) and Jordan Bochinski (3G, 5A) rank fifth and sixth in scoring.

In net, Liberty platoons two juniors who feature very similar stats — Cole Burack (1.20 goals-against average, 94.9 save percentage with two shutouts) and Josh Halpenny (1.60 GAA, 92.5 SP, one shutout) — who have both posted 4-1 records and each made 111 saves in 300 minutes of action.

Ohio scouting report: The Bobcats' only two regulation losses this season came against Jamestown (N.D.), which is in its first season of eligibility to compete in the ACHA DI nationals. Ohio is coming off a series split with Stony Brook, Liberty's top ESCHL rival which visits the LaHaye Ice Center next weekend. Both games, played at Bird Arena, were decided in overtime with the Bobcats winning the first, 5-4, before dropping the rematch, 3-2, to slip three spots to No. 11 in this week's rankings.

Ohio graduated three of its top five scorers from last season, but still have outscored opponents 45-21. The Bobcats are paced by forwards Gianni Evangelisti (8G, 7A), Tyler Harkins (7G, 8A), and Bryan Lubin (3G, 5A), as well as defenseman Jacob Houston, who netted the game-winner in the opener against Stony Brook. In goal, Jimmy Thomas has started eight of nine games, going 6-2 with a 2.01 GAA and a 90.5 SP.