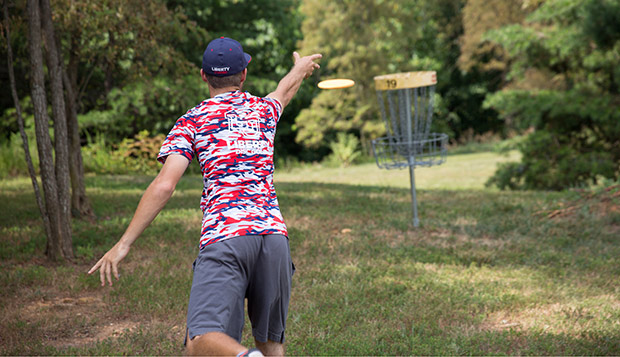 Liberty sophomore Jesse Miller follows through on a putt during the Virginia Commonwealth Games competition played in July on the Flames' East Campus course. (Photo by Kevin Manguiob)

Flames Head Coach Steve Bowman expects to fill out the final two roster openings by next weekend, with 11 men and three women currently on the team.

There will be at least five other collegiate teams in the field, including Clemson, Emory & Henry, Massachusetts, North Carolina State, and Ohio. The top three overall teams — more than any national qualifier in the country — will earn automatic bids to the April 11-14 National Collegiate Disc Golf Championships in North Augusta, S.C.

The Flames' top returning men's players include juniors Hunter Thomas, Ryan Shumate, and Zach Biscardi, sophomores Jesse Miller, Christian Wilborn, and graduate Jeremy Miekley. The competition for the No. 1 foursome is very even.

"It's pretty much up for grabs, and the guys know that so they are pushing each other in practice," Bowman said. "We've got seven guys playing well and we're trying to find the right pairings, guys who play well together, who have the right chemistry. You can't fake that."

The Lady Flames are led by graduate Heather Wyatt, who is joined by junior Hannah Trotz and sophomore Savanna Fox.

"They're all very new, but they're all picking up on it very, very quickly," Bowman said, noting that none of the female players have tournament experience.

On the Friday night before the tournament, Liberty will host a "Feats of Strength" power team performance, which will include a Gospel presentation. Players will have dinner together before the putting and distance competitions take place at the Liberty Lacrosse Fields.

On Dec. 2, for the first time, Liberty will showcase its courses to the community by hosting the first event of the 14th-annual Blue Ridge Area Winter League (BRAWL) Series. Approximately 10 more tournaments will be held on a weekly basis at various courses throughout the region.

"That will be a good tune-up to start the year off, and we will be playing some smaller events in the spring to get ready for nationals," Bowman said, including tournaments at NC State, Clemson, and the Tri-State Challenge.