DII Flames battle back before PSU caps sweep in shootout 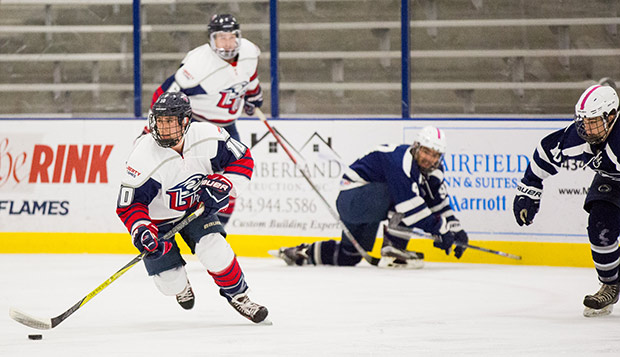 Facing what will likely be their closest rival in the Southeast Region this season, Liberty University's ACHA Division II men's hockey team got its first taste of defeat this weekend as the Flames were swept by the Ice Lions, 6-4 on Friday night and 4-3 in a shootout on Saturday afternoon at the LaHaye Ice Center.

"They're a good team and they've beaten the best teams in our region so far," Liberty first-year Head Coach Ben Hughes said, noting that the Ice Lions upset traditional Southeast Region power Florida Gulf Coast last weekend. "We had a really good third period (Friday), but in the first two periods, they definitely outplayed us."

In Saturday's rematch, Liberty (4-1-1) overcame an early surge by Penn State (8-0) to tie the contest at 1-1 by the end of the first period on a five-on-three power play, with freshman forward Michael Niederer sneaking a sharp-angled shot from deep in the right circle past Penn State goalie William Holtforster.

Early in the second period, the Flames seized a 2-1 lead on a two-on-one score off a give and go pass from Robert Ward to fellow senior forward Paul Lamoureux, who sent it back to Ward for a one-time finish.

Liberty extended its lead to 3-1 by converting on a second five-on-three opportunity early in the third period. The Flames cycled the puck around the perimeter before sophomore forward Jamie Crane sent a cross-crease assist to Lamoureux for a finish from near the right post.

Moments later, with Penn State on a power play, Stephan Horgas dug the puck out of the right corner with a backhanded pass to defenseman Justin Wehrli for a one-timed finish in the right crease, trimming the deficit to 3-2.

"That's a goal for sure we want to have back," Hughes said. "There were definitely moments of refinement where we have to work on a few little things in the defensive zone, specifically on the penalty kill."

With just 2:52 left in regulation, Michael Ludwig then lifted a wrist shot from near the blue line through traffic that hit bar down, beating Flames junior goalie Blake Scott to tie the game at 3-3.

"Blake played really well today and he definitely kept us in it," Hughes said. "He made some big saves throughout the whole game."

Both teams had their share of chances in the five-minute overtime period before the game was ultimately decided in a shootout. Scott used his upper chest to block the first shot by Penn State's Nico Gricco and Crane put Liberty in the lead by deftly lifting his shot over Holtforster's shoulder into top right corner.

Penn State's Jake O'Donnell tied it up with a top-right corner wrist shot before Ward had his point-blank slap shot blocked low. Cole Stine gave the Ice Lions a 2-1 advantage in the shootout by faking left and threading a shot inside the right post before Lamoureux was denied by Holtforster, who iced the win.

Not counting the shootout, the Ice Lions outshot the Flames 37-23.

"It would have been nice to have finished it off but I was proud of how we played the majority of the game today," Hughes said. "Penn State is a really good team. They're fast, they put a lot of pressure on you. I saw us get better over the weekend. We have to work on fine-tuning some things."

The Flames were missing four players who would normally be in the lineup.

"We're seeing the effects of that for sure," Hughes said. "Hopefully they can get healthy."

Liberty has this coming weekend off to recuperate and get ready for a trip to New Jersey, where they will play at Rowan on Nov. 4 and Rider on Nov. 5.