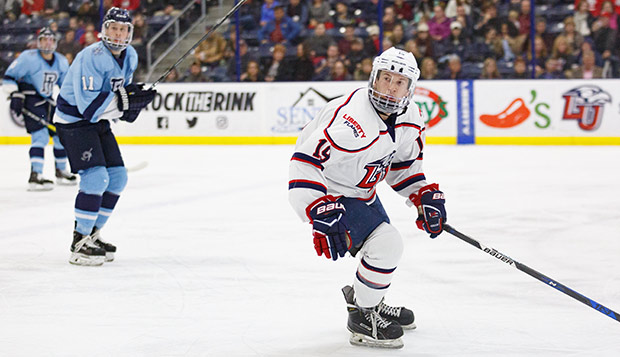 Liberty University's ACHA Division I men's hockey team improved to 7-0 in Eastern States Collegiate Hockey League (ESCHL) matchups against Rhode Island by completing a two-game sweep of the Rams with a 5-0 victory, Saturday at Boss Arena in Kingston, R.I.

"Our discipline tonight was a key," Flames Head Coach Kirk Handy said. "We only took one penalty and scored two power-play goals, so it was a pretty solid effort from our guys. We did a lot of things well tonight. We still have room for improvement, but we did a lot of things better this weekend."

"Cole played solid for us," Handy said. "I feel like our goaltending has been solid all year for us, which is nice to have on a night-in and night-out basis. Defensively, guys again stepped up and played well for us. It was a team effort tonight. The guys came to play for 60 minutes and that was nice to see."

Sophomore defenseman Chaydan Lauber got the Flames on the scoreboard first with a seeing eye wrist shot through a screen out in front off the first of three assists on the night from freshman forward Jordan Bochinski, giving Liberty a 1-0 lead at the 15:42 mark of the first period.

The Flames extended their advantage to 3-0 by the end of the opening stanza on goals by Quinn Ryan off an assist from fellow sophomore forward Brock Thompson and a spectacular shot from the point off the stick of Josh Bergen set up by freshman forwards Bochinski and Cole Gammer.

Liberty's last two scores came on the power play. Left all alone back door, Thompson capitalized on a five-on-three opportunity off feeds from Ryan and freshman forward Sam Carlson with 7:03 remaining in the second period before junior defenseman Zane Schartz capped the scoring with a five-on-four finish, with Bochinski assisting.

"It's a long trip up here (to Rhode Island) and I am proud of the way the guys played two games back to back," Handy said. "We look for consistency and we got it this weekend. We were doing the right things, making good decisions overall."

"We're definitely looking forward to it," Handy said. "It will be nice to be at home for the next three weekends. We just want to make our team better every time out."