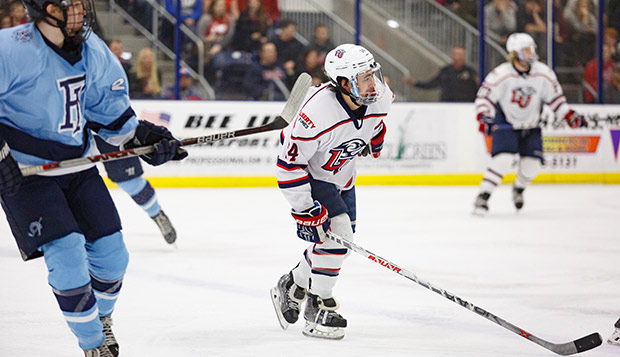 Junior forward Zechariah Roberts scored the only first-period goal on a power play to spark the Flames' attack. (Photo by Caroline Cummings)

In a rematch of last season's ESCHL Tournament semifinal, also hosted by Rhode Island, Liberty University's ACHA Division I men's hockey team opened a 4-0 lead on the Rams by the end of the second period en route to a 6-2 triumph, Friday night at Boss Arena in Kingston, R.I.

"We didn't have a great first period, but as the game went on, we started to play better," Flames Head Coach Kirk Handy said. "We played much better in the second and solid in the third. We were able to take advantage of some opportunities tonight."

Liberty (7-2, 6-1 ESCHL, No. 15 in this week's ACHA DI rankings) capitalized on its first power-play opportunity, with junior forward Zechariah Roberts sparking the Flames to a 1-0 advantage just three and a half minutes after the opening faceoff.

Then, immediately after killing a Rhode Island power play early in the second period, the Flames took advantage of the reprieve with the first of two scores by senior forward Grant Garvin, off a well-placed assist from sophomore forward Brock Thompson. Less than a minute later, sophomore defenseman Josh Bergen launched a beautiful blast from the point that found its way through traffic into the back of the net for a 3-0 lead, with Rams goalie John Ketzenberger screened on the play.

Garvin's second goal stretched Liberty's lead to 4-0 with 3:46 remaining in the second stanza before 25th-ranked Rhode Island (4-4-1, 1-3-1 ESCHL) finally ended junior goalie Josh Halpenny's shutout bid with 17:43 left in regulation. He had stopped all 18 Rams shots he had faced up to that point.

"Josh Halpenny played really well in goal, especially in the first period," Handy said. "He made some big saves when we didn't have our game to the level that we wanted it."

Just 25 seconds after the Rams' first goal, sophomore forward Quinn Ryan extended Liberty's edge back to four goals at 5-2 before Rhode Island responded with its second score after a timeout at the 12:11 mark.

Senior forward Tim Bierema capped the scoring right before the final buzzer, turning a broken play into his first goal at the Division I level after being promoted from the DII squad to start this season.

"Tim battled all night for us and it was nice to see him score a goal after battling on the penalty kill," Handy said.

"Our PK was excellent tonight, led by Tim and (sophomore forward) Victor Blomberg," he continued. "We gave them too many chances on the power play, taking some penalties in the offensive zone that we have to eliminate moving forward."

The Flames head coach expects better play from his team on Saturday.

"We know that Rhode Island is going to come out stronger and we need to make sure that we bring our best and are ready to go," he said. "We just have to keep going."

The puck drops at 4 p.m. in Saturday's rematch at Boss Arena.