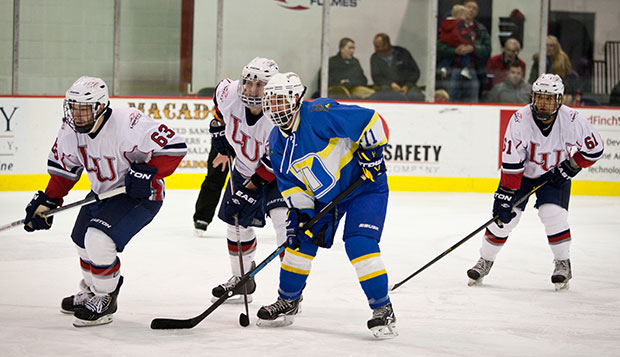 Since winning its first eight games, the Liberty Flames Division I men's hockey team has struggled to find a winning groove. Seven-straight losses were broken by a victory, followed by three more losses and another win. The Flames' schedule has been a tough one, filled with nationally ranked American Collegiate Hockey Association programs, including last year's national champion, but Liberty is eager to make a competitive run at nationals this year. Though they have competed in these tough matchups, the Flames are hungry to break open another winning run.

With Davenport on the horizon, Liberty expects a hard-fought contest. The Flames have nothing but revenge in mind after being swept at home by the Panthers in October.

Liberty Scouting Report: Liberty is coming off a split with Stony Brook where the Flames rebounded from a 6-4 loss with a four-goal first period onslaught to break open a 6-3 revenge win. Liberty notched five-straight goals in the victory.

Prior to that Liberty lost two at home to defending ACHA national champion Delaware 2-1 and 6-3.

Rick Turner leads Liberty in points with 39. He is third in the nation in goals with 23. Ryley Egan and Lindsay LeBlanc are neck-and-neck for second on the team in points with 25 and 24, respectively.

Against Stony Brook, Egan and Cam Bakker each posted two goals in the win and Turner, after a quiet Delaware series, looked to be back in stride with a pair of goals and an assist in the first game.

Davenport Scouting Report: The Panthers are hot right now, outscoring opponents 24-9 in five-straight victories, including four on the road. Davenport has not lost since dropping a Nov. 3 shootout to Oakland, whom the Panthers had already beaten twice this season.

In its latest series, Davenport beat Eastern Michigan 6-2 and 4-3.

The Panthers beat the Flames twice in Lynchburg Oct. 19-20, 6-3 and 6-5 (SO). In the second matchup, Liberty fought back from three down to force overtime and the eventual shootout for a disappointing near-comeback. The two victories gave Davenport rights to the newly inaugurated Blue and Gray Cup, a trophy the two teams will now compete for annually in a best-of-three format. The cup celebrates their rivalry and the historical one between Michigan and Virginia dating back to the Civil War. Though the cup is out of reach this year, Liberty can slim the win margin in an otherwise closely contested season series.

Davenport has four players above the 20-point mark, and another just one point away. Mason Bohlinger is tops in points for Davenport with 29 (11 goals, 18 assists) followed closely by Tyler Quigley at 28 (14 goals, 14 assists). Quigley leads the team in goals and Bohlinger in assists.

Goalie Phil Graveline (9-5) has seen the most action for Davenport and boasts a .90 save percentage and a 2.59 GAA.

All-time Series: This will mark the 20th overall meeting between Liberty and Davenport. The Panthers lead the series at 10-8 with one tie. Last season, the two teams split their four games, with the road team sweeping in each series (Liberty winning 4-3 and 7-4 in Michigan and Davenport outscoring the Flames 4-3 and 4-2 in Lynchburg).

Coaches: Kirk Handy, in his 13th season as Flames head coach, has an overall record of 267-116-13. Phil Sweeney is in his second season as head coach with Davenport after serving as an assistant for seven seasons. He currently holds a 35-26 overall record.

Oakland Scouting Report: A 6-3 loss to Eastern Michigan Nov. 18 extended a Grizzlies' losing streak to six-straight. The streak began with a Nov. 8 shootout loss at home to current No. 1 Arizona State, followed by back-to-back home losses to another Western powerhouse Arizona.

Oakland was last year's ACHA National Championship runner-up and has competed with tough programs this season, including three of the nation's top five in the ACHA Division 1 Rankings No. 8.

Anthony Coles has the most goals for Oakland with 12 and is second in points (21). Billy Balent has 17 assists and 24 points to lead the Grizz.

Coaches: Oakland Head Coach Jeremy Bachusz, in his fourth season at the Grizzlies' helm, has an overall record of 83-46-12.