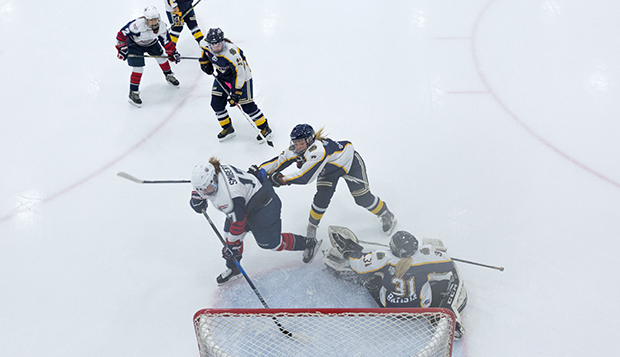 Sophomore Alex Smibert attacks the net in a game earlier this season at the LaHaye Ice Center.

The Lady Flames (5-2, 5-0 ACHA) got goals from eight different players in a 10-0 blowout of the Ice Lions (0-4), who previously gave up 15 goals in two shutout losses to defending ACHA DI national champion Miami (Ohio) University.

Sophomore forward Aly Morris started the scoring at the 11:14 mark for Liberty, cutting through the right crease and capitalizing on a pass from behind the cage from sophomore defenseman Rachel Gibson, set up by a secondary assist from senior forward Chelsey Greenwood. With the Lady Flames on a power play, senior forward Courtney Gilmour lifted Liberty to a 2-0 advantage by deflecting in a shot from the top of the left circle off the stick of senior defenseman C.J. Tipping, who had received a pass from sophomore forward Deena Birney.

Liberty added five goals in the second period, the first two by junior forward Lauren McDonald. Sophomore forward Emily John assisted McDonald's first score five minutes after the faceoff by feeding her on a three-on-two fast break for a top-shelf finish from the left circle. After McDonald dug the puck out behind the right side of the cage with a beautiful backhanded dish, Morris and Gibson combined to set her up for her second score with a cross-crease feed for a power play putaway, extending the Lady Flames' lead to 4-0.

Birney made it 5-0 by chipping in the rebound of a shot by freshman forward Shelby Bradley that Birney and sophomore forward Tiana Lisle had set up with 9:17 left in the second period. Just over a minute later, freshman forward Shannon Fehr scored the first of her two goals on the day, skating through the left circle before lifting a wrist shot into the top right corner of the cage past Ice Lions goalie Emma Shannon. Fehr was assisted by sophomore defenseman Holly Turner and McDonald.

Greenwood capped the second-period scoring by lifting a dropback pass from Morris top-shelf past Shannon, stretching the Lady Flames' lead to 7-0 with 7:17 left in the stanza.

Fehr opened the third period with a goal similar to her first, this time assisted by McDonald and John. Gibson made it a 9-0 game by taking a backdoor pass from sophomore forward Mackenzie Carroll and following her own shot to finish five-hole before Bradford added the finishing touches at the 3:01 mark with a goal assisted by Birney off a rebound.

Sarah Gundry, a sophomore transfer, recorded nine saves in goal to post the shutout in her first ACHA start for Liberty while Shannon made 31 saves, in addition to letting in 10 goals, for Penn State.

Liberty will take to the road this weekend for games at Stevenson (Md.) University, Saturday at 8:15 p.m., and at the Northern Virginia Hockey Club, based in Haymarket, Va., Sunday at 11:20 a.m.