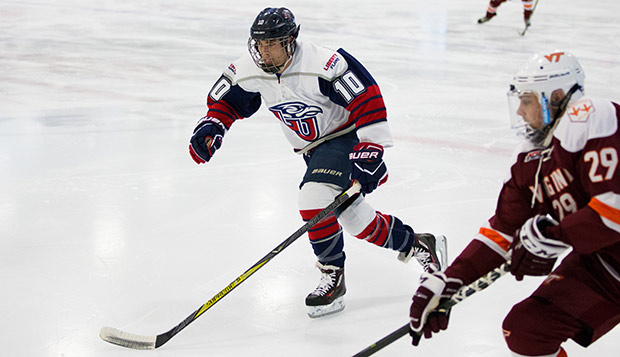 Junior goalie Blake Scott made 32 saves to preserve the win for Liberty (3-0), which outshot the Cardinals, 45-34.

"Blake played a great game; he was the catalyst," Flames first-year Head Coach Ben Hughes said. "He kept us in the game by making some really good saves that if he didn't make, it could have been a different outcome."

"We dominated the first period," Hughes said. "Then in the second, Louisville scored two goals — one on a power play (at the 17-minute mark) and one short-handed (with 1:18 left)."

A scoreless third period featured a total of seven penalties, four on the Flames.

"We took way too many penalties so there was a lot of going back and forth on special teams," Hughes said. "We played a very good first period, but slowed down the rest of the way. We hung on strong and persevered, though, and can learn a lot from this. We want to stay disciplined and be consistent."

Liberty has a quick turnaround for its rematch at Louisville, set for 3 p.m. Saturday.