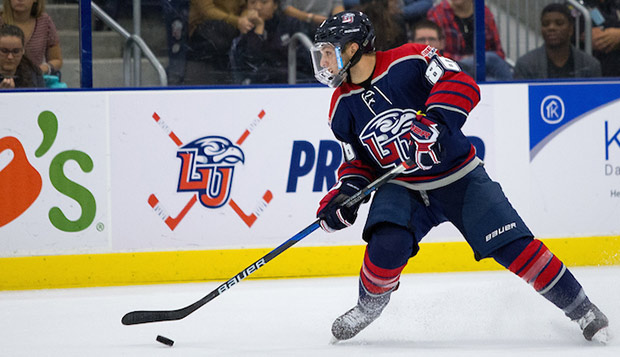 Sophomore defenseman Josh Bergen clears the puck during a recent game at the LaHaye Ice Center. (Photo by Leah Seavers)

"We have a good idea of what they're going to bring to the table, but as usual, our big focus is on our team, making sure we become better and get where we need to be," Flames Head Coach Kirk Handy said. "Our guys are working hard and they've come back from Fall Break ready to go."

Since a season-opening loss to Alabama, Liberty has executed its overall game plans much more efficiently and have been stellar on special teams — both offensively and defensively.

"Both the power play and penalty kill have been strong for us, but that's something we're still refining and trying to make better," Handy said. "We're looking forward to seeing what we can improve."

Alumni hockey players on hand for Homecoming representing the past 10 seasons of Liberty's ACHA Division I men's program and its previous three decades of Division II teams will be honored during the first intermission of Friday's opener. After the contest, more than 30 of those players are expected to suit up for an alumni game, starting at around 9:45 p.m.

In other news, it was announced this week that the 2019 and 2020 ACHA National Championships for all five divisions (DI, II, and III men and DI and II women) will be played near Dallas after the 2018 tournaments are held for the second year in a row in Columbus, Ohio, from March 8-13.

Liberty scouting report: The Flames, winners of five in a row, remained at the No. 13 spot in this week's ACHA DI rankings after sweeping Rutgers by 6-0, 6-0 scores in their first road series on Sept. 22-23.

Liberty, which demonstrated its explosiveness on offense in its last home contest — a 14-2 rout of West Chester — is sparked on attack by senior forward Grant Garvin (7 goals, 10 assists) and his sophomore linemates Brock Thompson (7G, 6A) and Quinn Ryan (3G, 10A).

The Flames will be without freshman forward Ryan Cox, their fifth-leading scorer, for the next two weeks but should have sophomore defenseman Garrett Nelson back in the lineup to complement junior defensemen Kyle Crane and Zane Schartz and sophomores Josh Bergen, Matt Cruickshank, Jacob Fricks, Chaydan Lauber, and Basil Reynolds on the back line. Schartz is Liberty's fourth-leading scorer (2G, 9A).

Syracuse scouting report: The Orange are in their first season of competition in the ESCHL after winning the past two North East Collegiate Hockey League (NECHL) regular-season titles to clinch automatic bids to the ACHA DI National Championships. Syracuse, which opened its season with a sweep of Navy before splitting its ESCHL debut series with Delaware, broke into the top-25 rankings after its 8-0 rout of Canisius College. That was its fifth consecutive game at Tennity Ice Pavilion, making this weekend's series is its first away from home.

All-time series: This is the first meeting between the two teams at the Division I level.