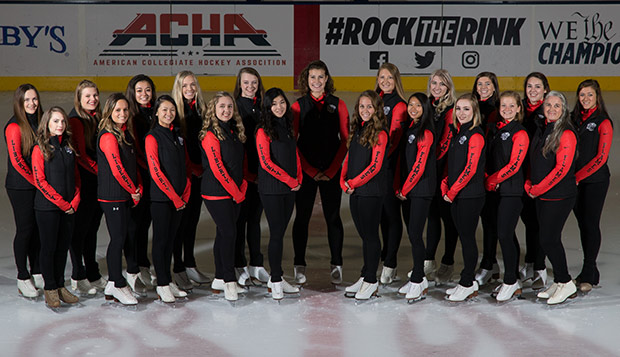 Freshman figure skater Angela Bosher, who represented Liberty University at the U.S. Figure Skating Collegiate National Championships in Adrian, Mich., in August, will be competing independently at this week's South Atlantic Regionals, from Wednesday through Sunday in Aston, Pa.

"She's one of our top novice skaters and she is in good condition right now," Lady Flames Head Coach Dawn Harter said. "She has a strong short and long program."

The event, which uses International Judging System (IJS) judging, will draw hundreds of figure skaters, including 57 in Bosher's Novice division.

Bosher's teammates share her passion for the sport and have approached this season with an improved mindset as they prepare for the Nov. 11-12 Violet Ice Classic hosted by New York University — the first of three Eastern Sectional competitions. Liberty's last two Eastern Sectional competitions will take place Feb. 2-4 at MIT in Cambridge, Mass., and March 17-18 at Carnegie Mellon in Pittsburgh.

"We will be taking our top starters to each competition in order to maximize the team's 30 starts and potentially score high enough to secure one of the top four spots in the Eastern Section to qualify for the (April 13-15) U.S. Intercollegiate Championships in Denver," Harter said, noting that last year, when only the top three teams advanced to nationals, the Lady Flames tied for fourth.

The Lady Flames' Senior-level skaters are junior Cami Burkhardt and sophomore Chelsea Henry while sophomore Jordan Robinson and freshman Emma Henderson will compete in the Junior division and freshmen Haley Gram and Ashley Karle skate at the Juvenile and Preliminary levels, respectively.

Junior Sibylle Harter, who placed fourth in the U.S. Collegiate Nationals over the summer, is looking strong in both her short and long programs at the Intermediate level. Emily Hautbois, a senior who missed last season due to injury, will resume skating Intermediate in the spring.

Besides Hautbois, Robinson, and Henderson, sophomores Jill Holste, Grace Stevenson, and Kimmie Joe, senior Cheyenne Peterson, and junior Katherine Thacker — who competes in dance at the gold and international level — are also on the Lady Flames' synchronized skating team.

"Overall, we have much stronger-minded and (physically) stronger athletes this year," Harter said, noting that many spent the summer following training plans set up by LaHaye Fitness Coordinator Javaz Williams. "Liberty is attracting a lot of strong, competitive skaters and we have more people joining the team coming from a competitive background. The five skaters that went to the U.S. Collegiate Championships in early August are coming back with a fiery, competitive spirit and have something to prove to themselves."

John Carlow, a former professional world champion and U.S. National Team member, is in his fourth season as an assistant while Sue Tuck from Charlottesville is in her second year as the team's dance coach.

Starting this month, the Lady Flames have met weekly in the LaHaye Ice Center for interactive online sessions with Rebekah Dixon, an international mind-body performance coach based in Canada, to help give them a psychological edge.

"She talks with them about how to be competition-ready and have better mental strength and be more focused on the ice, so they will have better performances," Harter said.