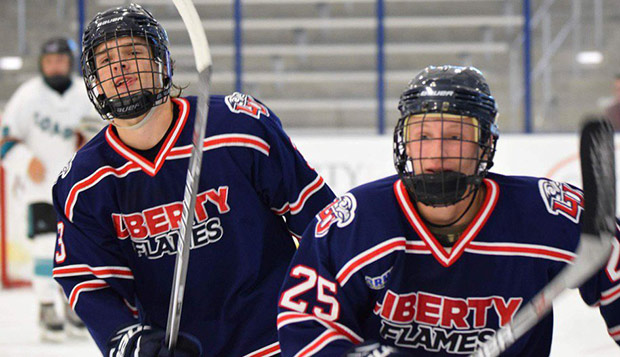 On Saturday, the Flames scored three unanswered goals in the third period to overcome a one-goal deficit.

Senior center Kade McDaniel opened the scoring for Liberty by following up his own shot for a point-blank putback with 2:40 left in the first period. CNU's Eric Miers evened the score by capitalizing on a breakaway opportunity with 51 seconds to go in the period before lifting the Captains to a 2-1 advantage with 6:00 left in the second.

Finally in the third, McDaniel netted the equalizer for the Flames with 18:10 remaining in regulation before junior forward Brandon Smith converted the game-winner at the 16:03 mark. Junior forward Kyle Jassmann added an insurance goal six seconds after the ensuing faceoff for the final score.

Liberty improved to 3-1 after defeating Radford and losing to George Mason over its opening weekend. CNU slipped to 3-4, with previous wins over VCU, Duke, and UNC and losses to George Mason and Elon.

The Flames return to the LaHaye Ice Center this Saturday at 9 p.m. and Sunday at 2 p.m. for games against Lipscomb University.