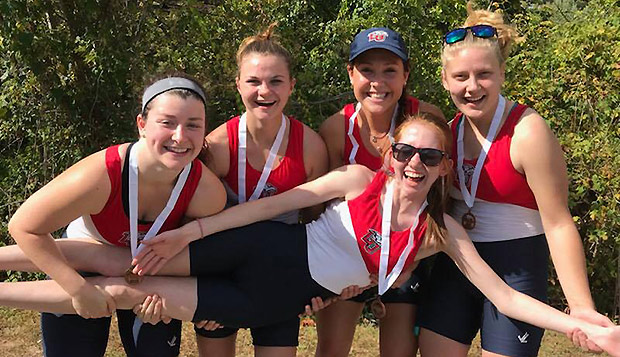 Liberty University's men's and women's crew teams opened their seasons at Saturday's 31st annual Head of the Ohio regatta, one of the largest regattas in the United States, held on the Allegheny River in Pittsburgh.

"It was a good opportunity to face some competition up north for our first fall race, since we usually race against schools from the south," Liberty Head Coach Debbie Prowse said, noting weather conditions were pleasant.

The Lady Flames' women's Varsity 4 boat, featuring Sarah Nixon at coxswain, junior rowers Baillie Knecht and Daisy Wedge, and senior rowers Lydia Miller and Allie Coughlan, captured a bronze medal with a third-place finish out of 17 entries in 16:59.9. Pittsburgh won in 16:18.7 followed by Carnegie Mellon (16:51.8) and Liberty, which crossed the finish line three-tenths of a second ahead of High Point University.

"We were really happy with their performance," Prowse said. "Overall, it was a good day of racing, a pretty venue and a good way to start the season."

"We were looking to do a little bit better but they just got overpowered by a lot of the other boats," Prowse said.

The Flames would have finished fifth, ahead of Carnegie Mellon, but were assessed a 10-second penalty for going through the wrong side of a bridge pier while being passed by another boat.

Spector also coxed the men's Varsity 4, rowed by Krupansky, Shemeth, Barrett, and Elliott, which placed eighth out of 11 boats in 14:52.1, ahead of Penn State's A team but behind it's B boat and Pittsburgh's A and B crews.

In the Women's Double, Spector teamed up with senior Sarah Catto to place fifth (third among collegiate boats behind only Pittsburgh and Carnegie Mellon) in 20:41.6, ahead of two Robert Morris (Pa.) tandems. Weisman placed fifth out of six finishers in the Men's Single in 18:47.9.

Complete results will be posted on RegattaCentral.com.

On Oct. 20, Liberty will send men's Varsity 4 and women's Varsity 4 crews to the Head of the Charles Regatta in Boston. It will be the first time in three years that the Flames will be represented at one of the largest and most prestigious rowing events in the United States, drawing NCAA Division I, II, and III schools from around the country and internationally. Liberty sent a men's foursome up for the 50th rowing of the regatta in 2014.

"We're really looking forward to racing on the Charles in two weeks," said Prowse, who rowed competitively for NCAA Division I Boston University. "I'm really excited to take my team back to where I rowed in college, to get them up there and see what it's all about."

Former U.S. Olympic coxswain Yasmin Farooq will provide a clinic for all coxswains at the regatta. Liberty's two boats will leave early Friday morning to arrive in time to get a practice run on the course, which features many turns and several bridges with arches that the coxswains are going to have to navigate through.