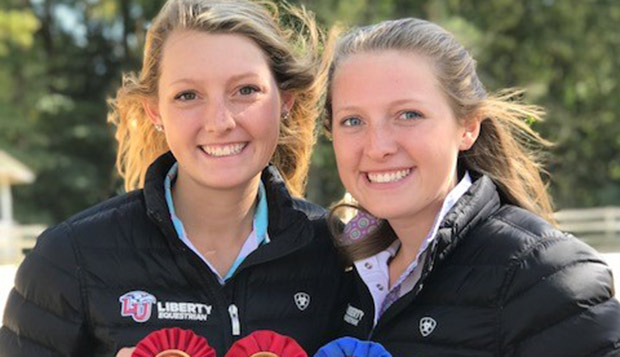 Bailey Boan and Brooke Boan pose with their two second-place and one first-place ribbon, respectively, Saturday at VCU.

Competing in Richmond, Va., for the second time in as many weekends at a show hosted by Virginia Commonwealth University, Liberty University's Hunt Seat equestrian team improved its total score with 31 points for another top-5 finish in Saturday's Zone 4, Region 4 competition.

Sweet Briar College, which competed with the Lady Flames in Region 5 from 2014-15 before joining them in Region 4 this year, was the overall team champion with 39 points.

The two Boan sisters accounted for 17 of Liberty's 31 points.

Liberty will next travel to Old Dominion University in Norfolk, Va., for a one-day show on Oct. 29.