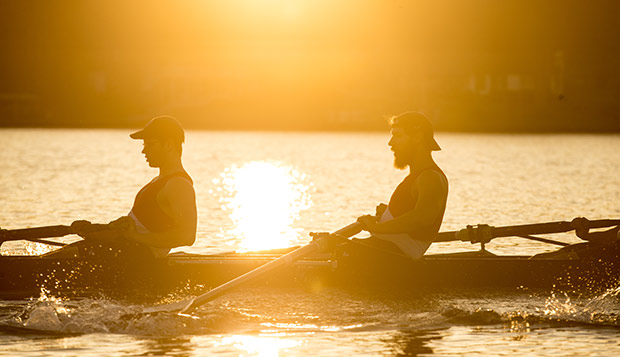 Early-morning practices on Smith Mountain Lake have prepared Liberty University's men's and women's crew teams for their season-opening regatta, Saturday's Head of the Ohio on the Allegheny River in Pittsburgh, hosted by the Three Rivers Rowing Association.

"We've been getting some really nice long rows in here at the lake, which allows us to row 6 kilometers or more in either direction," Head Coach Debbie Prowse said. "The weather's been really beautiful and cooperative, with very little wind or traffic out on the water."

The Flames and Lady Flames feature a combined roster of 28 rowers — 14 returning varsity members and 14 freshmen, sophomore, and junior newcomers on the novice squads.

"We've only been on the water for a few weeks now, but I feel like they made a lot of strides last year and this year, because we didn't lose that many rowers, have been able to pick up right where they left off," Prowse said.

She has added a volunteer assistant coach this season, former Lady Flames rower Kathleen Lopp, who graduated in May.

"In the past, we have had to mix in novice with our varsity lineups and teach them how to row, which didn't allow our varsity crews to reach their true potential," Prowse said. "Kathleen is doing a great job of getting the novice rowers up to speed and allowing them to take their time with the basics, rather than throwing them in the same boat with the varsity and expecting them to learn."

The novice rowers will not compete until the Nov. 11 Head of the South, the final regatta of the fall semester.

"We're giving them time to get used to the boat and build up their endurance before having them race," Prowse said. "They are all learning, picking up the stroke. We have some strong guys who are looking to get their technique down so they can really move the boat."

In addition to Monday, Tuesday, Thursday, and Friday morning rows at Smith Mountain Lake, the team participates in Wednesday morning indoor workouts on ergs set up in their new training facility at River Ridge Mall. The rowers also work out once a week under strength & conditioning graduate assistant Jared Lovelace in the Club Sports weight room.

"It's not a gigantic regatta, but a good one to start in for the first race of the year," Prowse said. "There is good competition up there for us and there are a lot of variables to contend with, but we should have strong performances based on how my team has been progressing on the water and the intensity they've been putting in at practices."

Spector will also cox the men's Varsity 4, rowed by Krupansky, Shemeth, Barrett, and Elliott, and work with senior Sarah Catto on the women's double.