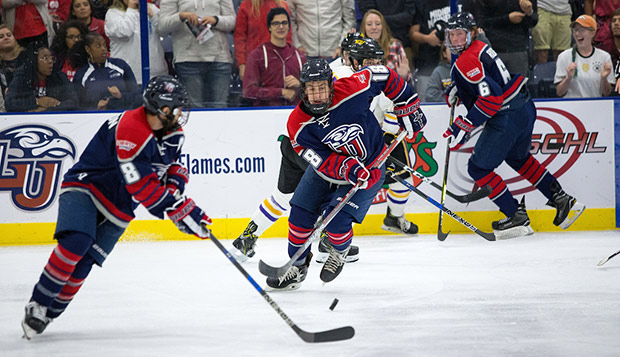 "There's another level we want our team to get to and we saw that for parts of the game tonight," Liberty Head Coach Kirk Handy said. "Consistency of play is something we really want to improve on, refine, and get better."

Junior transfer Cole Burack made 22 saves to post the shutout in goal.

"Cole Burack was solid for us tonight," Handy said. "He made some big saves, and was able to make some timely saves when he had to make them. He got his first shutout as a Liberty Flame, which was great."

Freshman forward Sam Carlson started the scoring for the Flames just three and a half minutes after the opening faceoff, finishing assists from Garvin and sophomore forward Quinn Ryan.

"We were doing a line change and he stayed out there and chipped in offensively," Handy said of Carlson. "He's a solid player for us … at both ends of the rink."

Just under the 11-minute mark in the second period, Ryan pushed Liberty's lead to 2-0 off assists from sophomore forward Brock Thompson and Garvin, who scored the Flames' first power-play goal two and a half minutes later by finishing feeds from Thompson and Ryan.

"We always want to make sure we win the special teams battle and our penalty kill was solid tonight," Handy said. "We killed off at least three penalties and we were able to score two goals on the power play."

The Flames were only whistled for four penalties throughout the contest.

"For the most part, we were pretty disciplined in the way we played tonight, which is something we haven't had in the past couple games," Handy said.

With 7:47 left in the third period, junior forward Zak Hayes ended a 20-minute scoring drought with a great shot after skating out from the top of the circle, converting off an assist from senior forward Tim Bierema.

Junior forward Zechariah Roberts then capitalized on Liberty's second power-play goal off an assist from junior defenseman Zane Schartz with 6:06 remaining before Garvin capped the scoring at the 2:45 mark off assists from Ryan and Thompson.

The two teams will face off again on Saturday at 3:30 p.m., streamed live on LiveBarn, a pay-per-view webcast.