Racquetball teams set to open seasons this weekend at UNC 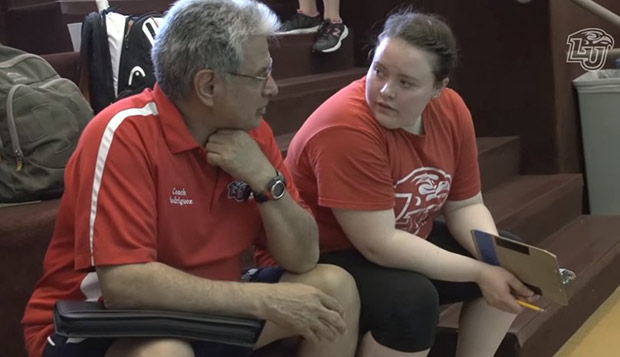 Liberty University's men's and women's racquetball team will travel to the University of North Carolina Chapel Hill today to compete in the first of three Mid-Atlantic Collegiate Racquetball Conference (MACRC) tournaments of the fall semester. The tournament starts tonight and concludes Sunday afternoon.

The Flames and Lady Flames will enter eight men's players and five women in the three-day event. Senior Daniel Seibler is the top-seeded men's player and will team up with third-seeded senior Seth Jordan in doubles play. Newcomer James Edwards, who has played the game for several years, earned the No. 2 spot in singles and will join forces with sophomore Garrison Walker, Liberty's No. 4 seed.

On the women's side, senior Sadie Abramowicz is back at the No. 1 singles position after missing all of last season with a torn rotator cuff.

"She seems to be playing pretty well," Liberty Head Coach Danny Rodriguez said of Abramowicz, who competed at the USA Racquetball Collegiate National Championships as a sophomore in Arizona before undergoing knee surgery. "All the women get along with each other and work well together."

Abramowicz will pair up with second-seeded sophomore Danielle Pearson in women's doubles and third-seeded senior Caroline Morse will play with fourth-seeded junior Lindsey Marston. Rebekah Olson is a first-year addition to the team with strong potential.

Rodriguez is optimistic about his teams' chances of competing in the MACRC this season, though schools such as UNC have a significant advantage in roster size.

Liberty's second tournament of the semester is set for Oct. 28-29 at North Carolina State.