Flames strive to maintain momentum on road against Rutgers 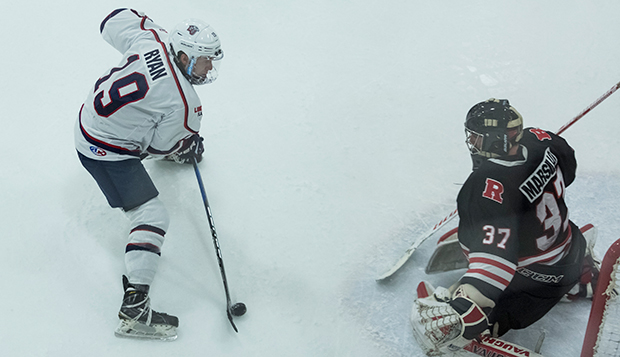 The last time Flames sophomore Quinn Ryan faced Rutgers, he scored three goals, including a dazzling wraparound that put him on ESPN SportsCenter.

The journey will be a homecoming of sorts for Flames sophomore forward Quinn Ryan, who is from northern New Jersey and has played hockey with a couple of the Ice Knights. Ryan (three goals, six assists) is in a three-way tie for team scoring lead with sophomore linemate Brock Thompson and junior defenseman Zane Schartz with nine points, one point behind senior linemate Grant Garvin (3G, 7A), Liberty's scoring leader the past two seasons.

"Quinn Ryan he has been playing well and I have been real impressed with his focus and the way he has evolved as a player," Flames Head Coach Kirk Handy said. "In the third period of (Saturday's 14-2 rout of West Chester), Quinn still went in hard on the back check and came back and blocked a shot. Quinn is seen as a great offensive player, but he's also a very solid defensive player, someone who competes on both ends of the rink."

Rutgers is the team against which Ryan scored his lacrosse-style wraparound goal that earned the No. 2 spot on ESPN SportCenter's Top 10 Plays of the Night in the team's final meeting last season on Feb. 11, a 10-0 shutout at the LaHaye Ice Center.

The Ice Knights are also the team the Flames defeated to start the 10-game winning streak that they took into the ACHA DI National Championships, avenging a 5-3 setback on Dec. 4 at Pro Skate Arena with a 7-3 victory there on Jan. 29. Handy hopes Liberty can maintain the level of play it showed in last weekend's ESCHL openers.

"We are going into the weekend focused on improving as a team, working hard, and battling," Handy said. "We feel pretty good about the way we were able to execute last weekend. We've had a good week of practice and we are looking forward to continuing to get better and to keep moving forward."

Rutgers scouting report: The Ice Knights opened their season with 7-3 and 3-2 home losses — the latter in overtime — against Colorado State, the team that eliminated Liberty in the first round of last season's ACHA DI National Championships. Rutgers, which lost its top two scorers from last season, got a goal and an assist from Matt Langlois and Ian Zyvith in its opening series and two assists from fellow forwards James Summers and Tyler Gutierrez.

Chris Marsillo returns in net for the Ice Knights and after two games has a 4.98 GAA and 91.2 SP, matching his save percentage from last season when he played all but 63 minutes and went 12-16-1 with a 3.68 GAA.

Coaches: Handy is in his 18th season as the Flames' head coach and has compiled an overall record of 378-167-25. Joe Dickson is 2-9 as Rutgers' head coach after taking the helm in the latter half of last season.