Lady Flames, ranked No. 1 in ACHA, check Pride in rematch 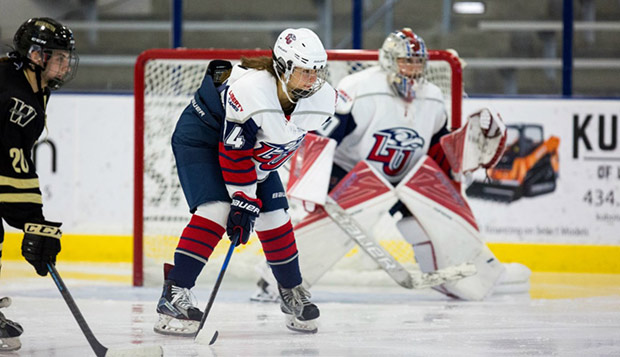 Liberty University ACHA Division I women's hockey team gave the Washington Pride U19 travel team a tougher fight in Sunday morning's rematch at the LaHaye Ice Center before falling by a 4-3 final.

"We showed considerable improvement from Saturday afternoon's game in most areas," Lady Flames first-year Head Coach Chris Lowes said. "We were able to do a short video session on Saturday night and it helped."

Three minutes after freshman forward Shannon Fehr tied the contest at 3-3 three minutes into the third period, the Pride countered with the game-winner past sophomore transfer goalie Sarah Gundry off a faceoff set up by an icing violation against the Lady Flames, who then missed an assignment on defense.

"That last goal we'd like to have back, but we had our opportunities," Lowes said. "We responded better than we had the day before so it was a good experience for us. We're implementing a lot of new stuff, systems that are new to the entire team, so I knew the learning curve would be steeper than usual."

Sophomore forward Alex Smibert got the Lady Flames on the scoreboard first with a low wrist shot from the middle of the ice off a scramble play, giving Liberty its first lead of the series five minutes after the opening faceoff.

"She's dangerous," Lowes said. "We want her getting five or six shots per game because she's a real weapon."

Junior forward Lauren McDonald netted the Lady Flames' second goal on a beautiful shot from the top of the right circle into the top left corner of the cage, putting the puck high over the glove of Washington goalie Gabrielle Henry.

But by the end of the first period, the Pride led 3-2 and held onto the lead through a scoreless second.

In the third period, Fehr controlled the puck in the slot area and skated past one defender before slipping a backhand though the goalie's legs for the equalizer.

Lowes said his players learned much more about themselves by being tested this weekend than they had in a 10-0 exhibition victory over the visiting Hamilton (Ontario) Hawks U18 travel team on Sept. 1.

"(Washington is) a very talented team made up of elite hockey players from the East Coast, many of whom will play at the NCAA Division I level," Lowes said. "I was very impressed with their speed and playmaking. They gave our defense all they could handle, especially on the rush. If I could play good hockey like that every weekend, we'd take it. Next year, I'd like to play them twice at the start of the season and twice more during the season to measure our progress."

Liberty actually doubled the Pride in shots in the first period and outshot its guests for the game, but Washington's speedy attack was difficult to contain.

"Their girls were dangerous one-on-one in the open ice," Lowes said. "Washington's got as much speed as anyone we'll play. They're young, but very skilled and very fast, and they battled hard."

The Lady Flames are ranked No. 1 in the ACHA Division I Preseason Poll, ahead of Miami (Ohio) University, which defeated Liberty in last season's ACHA DI final for its third national championship in four years. The two teams will not meet in the regular season.

"Every team we face this season will be amped up and motivated to upset us," Lowes said.

"It will test our conditioning," Lowes said of the three games in three days. "We played deep benches in both of these games (against Washington). Our fitness is going to have to be there and (Assistant) Coach (Justin) Forth will scramble some lines to keep them fresh."

The Lady Flames will return senior defenseman CJ Tipping, who was sidelined for the weekend, available for the third game of their road trip and should have junior goalie Kelly Hutton healed from injury and ready to play as well.