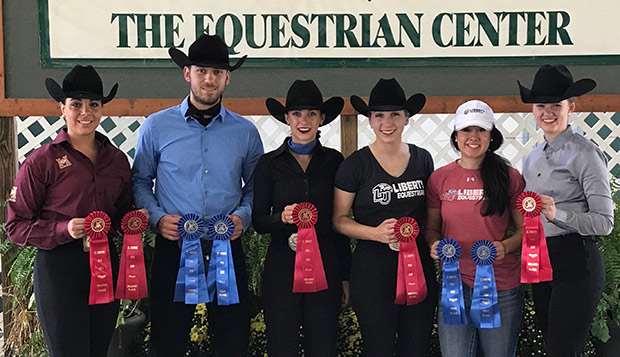 Junior team captain Kendall Burdette was Liberty's top performer on Saturday, earning a first-place finish in her intermediate flat class and second-place showing in her open over-fences competition to lead the Lady Flames as the reserve high-point rider.

Burdette also clinched her bid to next spring's Region 4 competition in the intermediate flat, adding seven points to her 29-point total from last year's regular-season shows to reach the 36-point qualifying standard.

"Kendall has definitely continued to excel, with her performance as reserve high-point rider," Hunt Seat Head Coach Suzanne Flaig said of Burdette, one of three Hunt Seat captains along with seniors Hannah Peterson and Zoe Leppke. "We had a good showing across the board, with strong performances all-around. We're very excited with both disciplines as far as what the newcomers will bring to the table this season."

Of its 34 team members this season (22 Hunt Seat and 12 Western), 14 are new to the program, including nine Hunt Seat riders.

St. Andrews, the two-time defending Intercollegiate Horse Show Association (IHSA) Western national champions, won both of the shows it hosted over the weekend with 34 points each day. It defeated NC State (27 points) and Liberty (26) on Saturday and finished tied with the Wolfpack (34) and ahead of the Flames (30) on Sunday.

Liberty will return to VCU this Saturday for the second of five Region 4 Hunt Seat shows of the fall semester while its Western team will travel back to St. Andrews on Nov. 5 for its second of three fall competitions.