Lady Flames shut out by Washington Pride in season opener 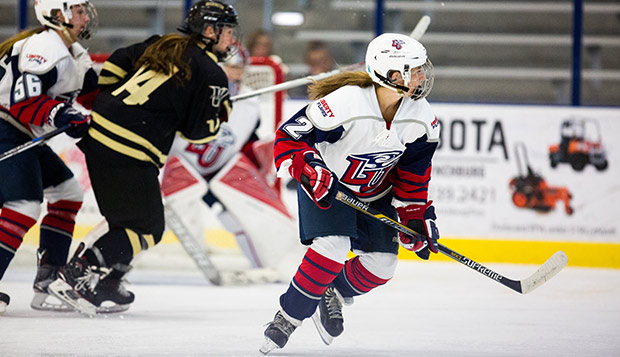 In its first official contest of the season, Liberty University's ACHA Division I women's hockey team was humbled on its home ice by the Washington Pride U19 travel team, which capitalized on a couple defensive lapses in a 4-0 victory, Saturday afternoon at the LaHaye Ice Center.

The Pride dealt Liberty its first shutout defeat since March 22, 2014, when Washington overwhelmed the Lady Flames in a 7-0 setback on their home ice one week after returning from a third-place showing at the ACHA DI National Championships.

"We anticipated they'd be strong and they were kind of what we expected," Liberty first-year Head Coach Chris Lowes said. "They were fast and they're well coached and they played a good game. We were right there. We outshot them and we had some very dominant minutes of possession, especially in the second and third periods, but there's just some things they did better than us. They were a little tougher than us. They won the battles in some of the hard areas, in front of our net and in front of theirs."

When Liberty neglected to clear the puck out of the defensive zone after digging it out along the back boards, Washington forward Julia Blitz caught the Lady Flames sophomore goalie Nadia off guard with 8:42 left in the first period, one-timing a shot from the left crease into the top right corner of the net.

"We made probably two mistakes (on that play), a failed clear in our zone and a missed assignment," Lowes said. "We had a lot of that today. We were a little sloppy and slow to identify our responsibilities in our end. We've just got to win some battles in front of the net."

The Pride extended its lead to 2-0 in the closing 1.6 seconds of the second period when forward Allison Curry tucked a backhanded follow of a backhanded shot off the stick of Lily Wildman past Lady Flames Rupoli inside the left post.

"We gave them kind of a gift there at the end of the second period and that was just kind of heartbreaking," Lowes said. "We were battling hard and we had a good period. We controlled the play in the second, but that's hockey. That's a lesson for the girls. We made a couple mistakes that led to that goal, so we'll get some good video and going through that will make us a better team."

Just over four minutes into the third period, Nicky Godoy skated between the circles on a breakaway and threaded a shot through the pads of Rupoli, giving Washington a 3-0 cushion.

Blitz later capped the scoring with her team-high 10th goal of the season, an empty-netter with 56 seconds remaining in regulation. Goalie Hannah Humphreys posted her second shutout in seven starts for the Pride (5-7), improving to 4-3.

"We had a few chances there," Lowes said. "(Forwards) Alex Smibert and Lauren McDonald both had point-blank chances and we failed to capitalize. Our power play had some good looks and they cleaned up their loose pucks in front of our net."

The Lady Flames will host Washington again Sunday at 9 a.m. back at the LaHaye Ice Center, where they will try to avoid being swept by the Pride for the second season in a row.

"We'll be better tomorrow and this is part of the process," Lowes said. "I know we're going to get better from it, whether we win or lose. That's why we play these games. They're as good as most of the teams we'll play in the ACHA, potentially. It's good for us. It's all positives at this point. Our girls wanted to win, I wanted to win, but right now, it's just about us embracing the process and focusing on our own game." 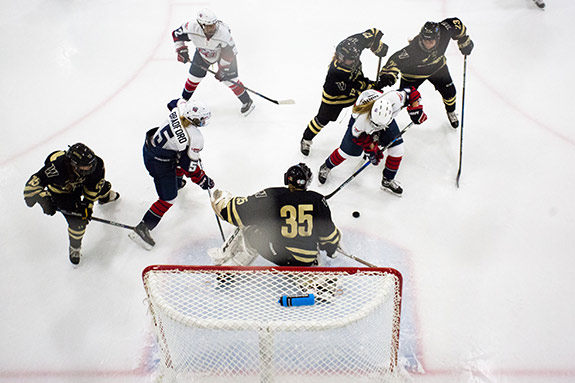 Liberty applies pressure around the Pride's cage, but could not finish. (Photo by Andrew Snyder)