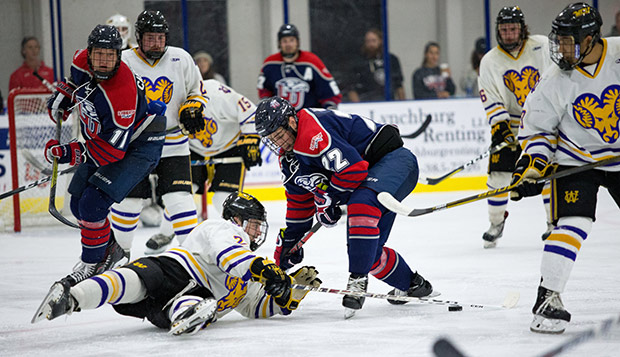 Junior forward Zak Hayes was one of three Flames ejected for fighting in the Midnight Mayhem matchup with West Chester. (Photo by Leah Seavers)

A guitar duet cranked out the National Anthem on the ice before the opening faceoff and a live band jammed between periods on the second floor, providing an electric atmosphere in the LaHaye Ice Center early Saturday morning. That set the stage for Liberty University's ACHA Division I men's hockey team to rock the rink in its first "Midnight Mayhem" game of the season, with a sellout crowd cheering the Flames on to a 6-1 rout of West Chester in their ESCHL opener.

"Those are the best (fans), hands down," said Liberty sophomore forward Brock Thompson, who netted the first hat trick of his Flames career, scoring their first three goals. "It is just fun to hear the noise, every time you touch the puck, every time anybody does anything. Everyone is in it. It is like the sixth man out there. They really drive everyone to have that extra push out there."

With 14:21 left in the opening period, Liberty sophomore forward Quinn Ryan was checked along the left boards, where he maintained puck possession and skated toward the left crease before sending a backhanded pass to Thompson in front. His top-shelf finish whizzed past West Chester goalie Breandan Colgan for an early 1-0 lead.

The Golden Rams netted the equalizer with 1:32 left in the first period off a faceoff from the left circle won by Mickey McShane. He sent the puck to Richie Brown in the high slot, where his shot veered wide right. However, the rebound off the back boards was controlled by forward Jake Horacek, who sneaked a shot from a tough angle near the right post past Liberty junior goalie Cole Burack.

Less than a minute later, the Flames reclaimed the lead when Thompson received an outlet pass from sophomore defenseman Basil Reynolds and skated all the way in down the right wing before threading a shot past Colgan for a 2-1 edge with 34 seconds left in the period.

"I liked our competitive level (and) our execution tonight," Handy said. "There was a lot of excitement out there. I was proud of our guys. We responded better tonight to the energy in the building (than in last Friday night's season-opener, a 3-1 loss to Alabama.)"

"The first game is always a little shaky, but we recovered nicely (in last Saturday's 6-1 triumph) and we're rolling now," Thompson added.

A fight midway through the second period resulted in three disqualifications on both sides but left Liberty on a power play on and off for the next five minutes. The Flames capitalized quickly on the man advantage, with Thompson completing his hat trick off assists from sophomore defensemen Matt Cruickshank and Basil Reynolds, stretching Liberty's lead to 3-1 with 11:34 left in the second period. With just over seven minutes to play in the stanza, the Flames struck again when freshman forward Cole Gammer stole the puck in the defensive zone, squared up, and deposited his shot into the top right corner of the net, pushing Liberty's lead to 4-1.

With 13:56 left in regulation, junior forward Zechariah Roberts one-timed his shot from deep in the right crease, finishing off freshman forward Ryan Cox's feed from the right back boards for a 5-1 Flames advantage. Cox later capped the scoring by putting away a one-on-one with Colgan after receiving a centering feed from freshman forward Sam Carlson on an odd-man rush with 4:22 to go.

"There was no individual play out there," Thompson said. "You have to play as a team or you're not going to win a single game. It's evident in a 6-1 victory that the whole team stuck together."

The two teams will duel again on Saturday night at the LaHaye Ice Center, with the Flames looking to improve to 7-0 against the Golden Rams over the past two seasons when the puck drops at 7 p.m. 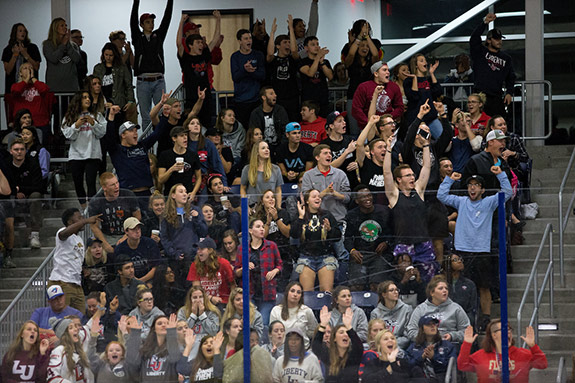 One of the largest student body crowds in the ACHA fanned the Flames to victory in the first
Midnight Mayhem matchup, Saturday morning in the LaHaye Ice Center. (Photo by Leah Seavers)