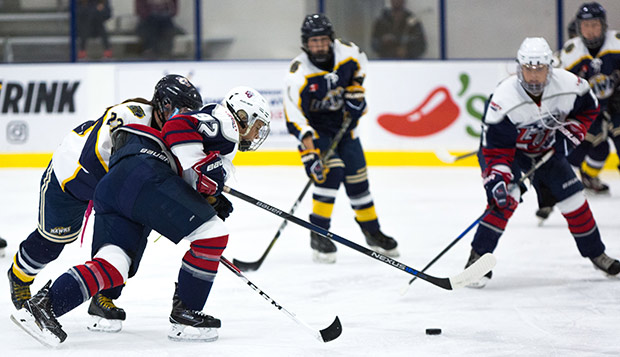 Senior forward Courtney Gilmour (92), shown in the Sept. 1 scrimmage against the Hamilton Hawks, is one of three seniors. (Photo by Nathan Spencer)

Though Liberty University's ACHA Division I women's hockey team graduated two of the most prolific scorers in its 11-year history — Carrie Jickling and Catherine Burrell — the Lady Flames return 12 of their top 14 scorers from last season's ACHA Division I National Championships runner-up.

"It's definitely an adjustment," senior forward Courtney Gilmour said. "But now that we know we're missing two of our strongest goal scorers, we know we have to be the ones to step up to the plate. The freshmen and the rest of the girls know, too, that we expect everyone to step up this year."

But they provide a powerful scoring punch (McDonald was the team's top scorer with 13 goals and 23 assists and Greenwood ranked third with 13 goals and 19 assists) and exceptional role models for the underclassmen both on and off the ice.

"Despite the low numbers of veterans, we still have a good core of leaders," Head Coach Chris Lowes said. "I like the vibe we have right now. We have a unified group."

Exactly half of the 24 players on are sophomores, and they form the foundation for the next three seasons, led by forwards Deena Birney and Alex Smibert, defensemen Rachel Gibson, Emily John, and Dana McLeod, and goalie Nadia Rupoli.

"We have a really good depth of people coming back," Greenwood said. "That will really help our team with how we are in the locker room and how we work together and it's really showing on the ice. Our team chemistry has already gotten so good and it's just going to go up from here."

Lowes is interested to see how his players mesh in their first two official games this weekend against the Washington Pride, a U19 travel team based in Maryland, after opening with an 8-0 scrimmage win over the U18 Hamilton (Ontario) Hawks on Sept. 1.

"We're excited to get back on the ice and for our girls to be challenged a little more," Lowes said. "Washington swept us last year and they're pretty strong again. We will probably try a bunch of different line combinations against Washington."

His players have adjusted well to his coaching style and the offensive and defensive systems he has introduced, which are similar to those he employed over the past nine seasons as head coach of the Flames' DII men's team.

"Most years, I've got four or five freshmen that need to learn the system and everyone else around them knows it," Lowes said. "Here, we've got 24 players that most of what I'm telling them is new, so we've got to go through that learning curve together. For where we are in the season, I'm very happy."

"Everybody is just really open-minded and excited to see what this year is going to bring," Tipping added. "Everyone has bought into his systems and that is the biggest thing."

They have two assistant coaches back from last season, Justin Forth and Chantal Kerr, providing consistency on staff, as well as an additional coach — graduate assistant Leah Carlson, a former defenseman for Robert Morris (Ill.) University's NCAA Division I team.

"Chantal (Kerr) and Coach Carlson both played so they know what we are going through and how hard it can be, so just having them here to talk through some things will be a huge impact this year," Gilmour said.

The Lady Flames are focused on returning to the ACHA DI National Championships in Columbus, Ohio, and pursuing their second crown after capturing their first over Miami (Ohio) University in 2015.

"We do have pretty high expectations on-ice-wise," Greenwood said. "For Liberty, it's the national championship or nothing. We're in it to win it this year and that's what we want. Last year was kind of a setback, meeting Miami again in the finals and having the roles reversed. We all don't want to experience that again."

"We use it as motivation," Tipping added. "If you want to be the best, you have to beat the best and right now Miami is the best. Because we have so many returning players, we know what it's like to be there and we know what it feels like to lose. None of us would want to feel that again."