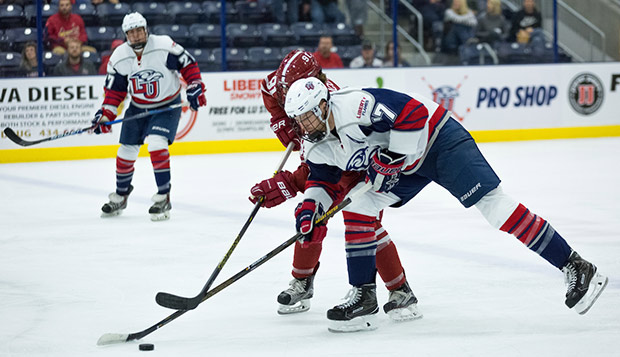 Decked out in new red, white and blue sweaters, Liberty University's ACHA Division I men's hockey team started Friday night's season-opener against Alabama on a high note before being shut out for the final 45 minutes of a 3-1 setback played in front of a packed LaHaye Ice Center crowd.

"It wasn't the way we wanted to start the year, obviously," Flames Head Coach Kirk Handy said. "We need to have the focus and the desire and it was there in spurts. It came in waves. Was our effort where it needed to be? It was there, but it really wasn't a good night for us tonight as far as our execution. We've got to come back tomorrow and execute better."

Freshman Sam Carlson, who spent much of his summer working on an Alaskan fishing boat, was in the right place at the right time to cast the first goal of the 2017-18 season into the back of the net, with a shorthanded finish five and a half minutes after the opening faceoff. Liberty junior forward Zak Hayes won a right-circle faceoff in the Crimson Tide's defensive zone and sent the puck across the crease to Carlson, where he slammed it from point-blank range under the pads of drawn-out Alabama goalie Jesse Gordichuk.

"Zak Hayes won the faceoff and put a shot on net and the rebound off the goaltender's pads came right to my stick," Carlson said. "It all started with (sophomore forward Josh) Hamilton the shift before and Ryan Cox, driving to the net low and getting that offensive faceoff. That was a great turnover in our defensive end and then a full-ice rush the other way and a shot on net to get that offensive-zone whistle."

The Flames missed a couple more shorthanded scoring opportunities on breakaways by Hamilton and Hayes before the Crimson Tide struck back with the tying and go-ahead goals early in the second period. Just 34 seconds into the stanza, ACHA DI All-American defenseman Pierre Ouellette launched a rocket from the top of the left circle that Alabama forward Jeremy Hannah redirected from in the right crease past the glove of Flames senior goalie Josh Halpenny into the top-right corner of the net.

Then, at the 14:14 mark, in the final 10 seconds of a Flames power play, the Crimson Tide surged into the lead on a shorthanded breakaway by defenseman Jon Lovorn, who beat Halpenny one-on-one with a stickside shot for a 2-1 advantage.

Freshman forward Ryan Cox nearly tied it back up when he skated the puck toward the right corner and regained his footing after being dragged down to the ice by a defender. He made a spin move to follow his own shot with a point-blank putback from right in front that Gordichuk gloved with quick reflexes.

"He saw a lot of shots and played solid tonight," Handy said of Gordichuk, who made 39 saves as Liberty outshot the Crimson Tide, 40-16. "We had our chances tonight. We're not going to make any excuses about it. We just didn't execute the way that we wanted to."

"We just need to do a better job of sustaining the momentum, to keep hammering it and taking it to them instead of letting off," Carlson added.

Less than three minutes into the third, Alabama padded its lead on a shot by forward Marc Demers from deep in the left crease off a shot from the point by Thomas Godfrey and back-door feed by Stephen MacInnis.

Liberty's chances of staging a late-night comeback bid were all but eliminated after Cox was ejected with 3:37 remaining and Alabama went on a five-on-three power play for the next two minutes before closing out the contest with a five-on-four advantage.

While their penalty kill was stellar right down to the final three and a half minutes when it extinguished multiple Alabama chances, the Flames went 0-for-4 on the power play, failing to capitalize on three man-up situations in the second period.

"They were able to take advantage of our power play not executing tonight," Handy said. "Hats off to them. They're a good hockey team and they played well. We still feel good about the group of guys we've got in there. We have learn from it and we're going to and we're going to come back a better team (in Saturday afternoon's 2 p.m. rematch)."