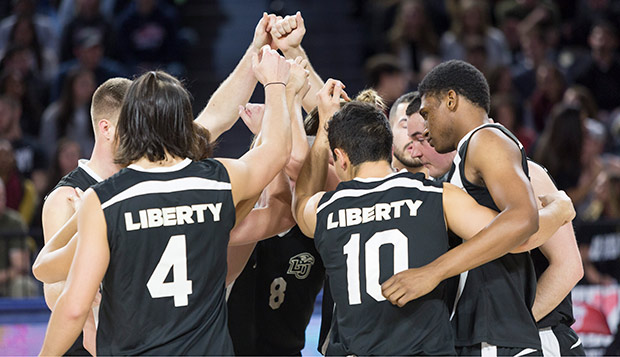 Senior outside hitters Gene DeJesus (right) and T.J. Forsythe return as two of the Flames' most powerful spikers. (Photo by Nathan Spencer)

The Flames returned 13 players from last season — promoting five from the Division II to the Division I squad — and introduced seven newcomers on DII after finalizing their 20-man team at the end of August.

Liberty endured two-a-day practices in the first week of September to improve their conditioning and get into the competitive mindset.

"Two-a-day workouts were a great way to renew our focus," Flames Head Coach Bryan Rigg said, noting that assistant coach Ryan Culkin and returning junior setters and DI and DII team captains Kaden Knepper and Eli Plasterer led the drills in the preseason training camp. "For many of them, this is their third year playing together. These guys have stuck with it and are ultra-committed. The great thing is they all have the same goal and desire to be a better team and to be better Christian men."

Plasterer, who served as DII team captain last year, will challenge Knepper for the starting spot on the DI team.

"It's a good problem to have to have two quality setters," Rigg said, noting that he doesn't plan to use the 6-2 formation he experimented with when they were freshmen.

He also called up four sophomores from the DII level — middle hitter Nathan Jenson, outside hitter Sam Hess, left-handed opposite hitter Daniel Koloff, and libero Jared Patterson. Rigg said Hess and Koloff are undersized hitters, but exceptional passers, which may eliminate the need for a defensive specialist in the rotation.

He brought in four recruits who will start their careers on the DII squad — middle hitters James Ildefonso and Joel Slaughter and outside hitters Cal Sartor and Sean Taggart.

"They will make the DII team a little better than it was last year and deeper than it has ever been," Rigg said.

He also picked up three walk-ons from the August tryout — graduate student and former University of Richmond DII player Kevin Thomas, opposite hitter Austin Dangerfield, and 6-foot, 6-inch-tall middle hitter Zach Martyn, who is transitioning from basketball to volleyball and packs a power spike.

DeJesus, Quakenbush, Knepper, Jensen, and senior Caleb Pitcher improved their indoor games by cross-training on the Flames' beach volleyball team over the summer.

"All of those guys who stayed and played beach this year, they're going to be a force to be reckoned with this year," Rigg said. "They developed their games more and look like they're in peak form."

Rigg will experiment with his lineups during the Flames' Fall season debut, when they host ECVC rivals Duke, JMU, Longwood, NC State, Virginia and VCU in the LaHaye Multipurpose Center.

He will have his DI and DII rosters set before Liberty travels to NCAA Division II power King College on Oct. 28. That event will prepare the Flames for the Nov. 10-12 Hardwood Classic hosted by Michigan State, which will include 21 teams, including nine of the top 11 in the final 2017 NCVF Division I rankings. Liberty will conclude the semester by competing against a few more NCAA Division II teams in the Nov. 17-18 Lancaster Bible Tournament.

Overall, the Flames have high expectations for the 2017-18 season and hope to be playing their best volleyball as they approach tournament time toward the end of the Spring semester.

"Both teams are well-balanced and more talented than last year," Rigg said. "We all want to win the East Coast Championship and we expect both teams to be ranked in the top 16 by the end of the year to make it into the gold brackets" at the National Collegiate Volleyball Federation (NCVF) Collegiate Club Volleyball Championships set for April 11-14 in St. Louis.