In NY, Flames fall to 'Wolves 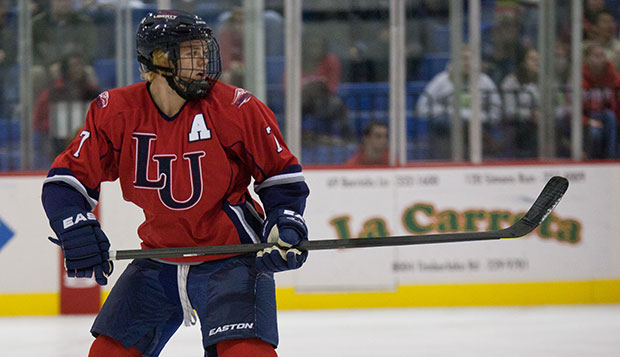 On the road Saturday, the Liberty University Division I men's hockey team was outscored by Stony Brook 6-4 in the first of two matchups.

In the first period the Flames turned the puck over in front of their net, resulting in a Seawolves goal. Andrew McCombe set up Lindsay LeBlanc with a high chip and LeBlanc finished to tie the game at 1-1 before the first break.

One minute into the second period, Flames' leading-scorer Rick Turner put back his own rebound to give Liberty the lead. A minute later, Stony Brook scored to tie the game back up.

With almost five minutes past in the second period, Stony Brook scored again, regaining control of the game. Another Seawolves goal at 8:13 upped the margin to two. Luke Baumgarten pounded one home from a Turner assist to cut the Flames' deficit to one with under three remaining in the second. Stony Brook held on to the 4-3 lead entering the third period.

In the final frame, Stony Brook scored five minutes in, padding its lead. As time ticked away, Liberty was unable to capitalize on power play opportunities. Turner managed to put in his second goal of the game with six minutes left, but Stony Brook answered the call yet again four minutes later to close the scoring with the two-goal lead intact.

Liberty battles the Seawolves once more at the The Rinx in Hauppauge, N.Y., Sunday at noon.