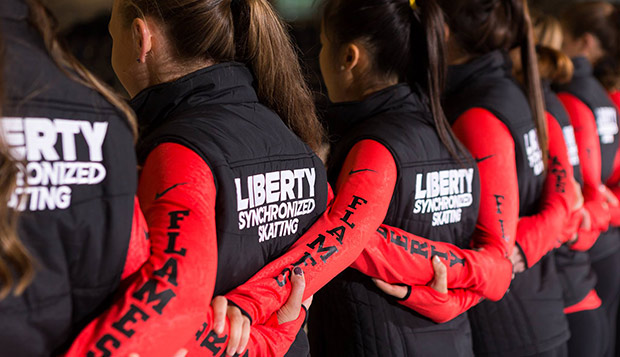 Featuring its largest, most talented, roster to date with 18 skaters, Liberty University's synchronized skating team is anticipating performing its highest-level programs throughout the 2017-18 school year, its first season competing in the Collegiate Division.

"Emily and myself are thrilled with not just the quality and skating ability of each of the new additions to our team, but also with the character, good attitude, and work ethic we've seen at each practice," Payne said.

Incoming freshmen added to the 2017-2018 roster include Emma Ockerman, a national competitor on the Novice Synchronized Skating Team Onyx (Mich.); Kaitlin Malayev, an Intermediate-level figure skater from Maine; Emily Wilson, from Vacaville, Calif., who has 10 years of competitive solo and synchro experience and a background in ice dancing; Hannah Pulley, from Glen Allen, Va., who brings 15 years of skating experience, including nine on Richmond Synchronized Skating teams; and Sarah Gentry, from Traverse City, Mich., who has six years of figure skating experience including three in synchronized skating.

"We are thrilled to have gained such strong and hard-working skaters to our team," Payne said.

Complementing Payne and Halvorson on the Lady Flames' coaching staff is team manager Anna Lulis, a transfer student from Northern Virginia with nearly years of highly competitive synchro experience at the University of Delaware and with the Senior Skyliners.

"Her technical experience and competitive outlook will help us to elevate our program and build our team to a new dimension," Payne said.

Before traveling to the season-opening Dr. Porter Classic, Dec. 1-3 in Ann Arbor, Mich., and the Cape Cod (Mass.) Classic from Dec. 8-10, the Lady Flames will skate for the LaHaye Ice Center crowd during intermission of Liberty's Nov. 3 Division I men's hockey game against Stony Brook.

They will also perform on their home ice at the third annual "PraiseFest On Ice" Christmas Edition 3.0 on Dec. 15 to sharpen their routine for their most important competition of the season, the Jan. 17-20 Eastern Synchronized Skating Championships in Estero, Fla. If the Lady Flames place high enough at that event, they will have the opportunity to represent Liberty for the first time at the Feb. 22-24 U.S. Synchronized Skating Nationals in Portland, Ore.