Lowes debuts with DI women's hockey on Friday vs. Hamilton 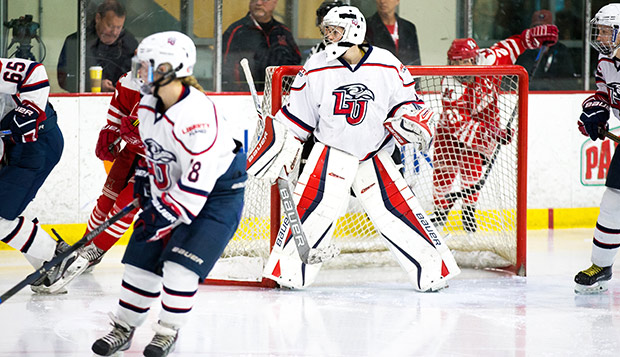 Liberty returns two of three goalies from the 2016-17 season, including Kelly Hutton, who started in the ACHA DI National Championship against Miami (Ohio). (Photo by Leah Seavers)

Striving to maintain the consistency of a program that has reached the Final Four in the past five ACHA Division I National Championships, Liberty University's ACHA Division I women's hockey team returns 18 players and two assistant coaches — Justin Forth and Chantal Kerr — from last year's national runner-up squad.

The Lady Flames feature a very young lineup, with 13 sophomores in the mix and only three juniors and three seniors — forwards Courtney Gilmour, Chelsey Greenwood, and C.J. Tipping.

"We graduated two of our top scorers, so we've got to replace quite a few goals and assists," Lowes said. "Whether we have people step up or we do it by committee is yet to be seen. We're still learning and identifying leadership and roles for veterans."

Lowes is elated that Liberty has such a solid foundation in place for the next few seasons.

"The transition from freshman to sophomore year is usually a big growth year, as I've seen historically from the men's teams I've coached," Lowes said. "We had guys like Ben Freymond who would go from solid role players to significant leaders with another year of growth and maturity."

"We should be strong for years to come and are only going to be limited by how much growth and experience those girls get," said Lowes, who was pleased with the performance of returning players and newcomers alike in tryouts.

"As a coach, it was neat coming in with a fresh eye, and for the players to have a fresh slate to prove themselves," he said. "Coach Forth has a real good handle on the girls' different strengths and who might play well together and there was a healthy competition throughout the lineup. We're still learning what kind of players each one of our girls wants to be."

He said the Lady Flames will feature both depth of talent and strength of conditioning, which should help them spurt past opponents in transition.

"We kept eight Ds, 13 forwards, and three goalies and if they can stay healthy that's ideal," Lowes said. "We should have up-tempo practices. With any less than that, it's hard to run full units.

He credits Club Sports Coordinator of Strength and Conditioning Chris Kerr, husband of 2015 ACHA DI National Championship MVP Chantal Lischynski who is now in her second season as the Lady Flames' goalies coach, for giving Liberty an edge.

"Chris does a lot for us, from conditioning to agility and explosiveness training to injury prevention and when we combine that with on-ice workouts, we should be in a good position over the next month," Lowes said.

The Lady Flames will open with an exhibition game against the Hamilton Hawks' top team on Friday at 6:45 p.m. at the LaHaye Ice Center before hosting the Washington Pride on Sept. 23-24.

"This will be a great weekend for us to kick things off, get our competitive juices flowing, and the two games against Washington will give us another chance to test ourselves," Lowes said, before Liberty opens its regular season over Fall Break at McKendree (Ill.) University on Oct. 5 and Lindenwood-Belleville (Mo.) on Oct. 6-7.