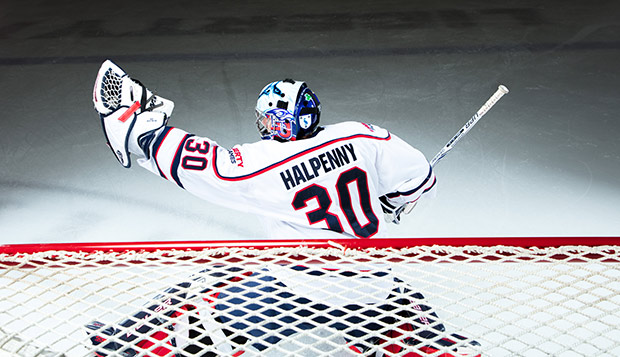 The Flames promoted another forward from the DII squad, sophomore Victor Blomberg from Sweden, to complement senior call-up Tim Bierema and bring the number of forwards on the team to 15.

"That shows the strength of our program when Victor and Timmy can jump up from the Division II level to play for our Division I team," Handy said.

Liberty has a good mix of sophomores (10) and juniors (eight) on the team, complemented by four freshmen and three seniors. The Flames feature a balance of scoring power and playmakers on attack and a solid defensive corps, strengthened by sophomore Josh Bergen shifting back from forward.

"Two things we added on our team this year were size and speed," Handy said. "We're a deeper team this year and we're excited to get going. As a coaching staff, we have worked hard all year to get to this point right here. Expectations are high and we have a real great group of guys who we get to battle with every day. God's blessed us with an opportunity to have this great group of guys and we're excited to see where we can take this team. I really believe it's a special group of men who can go out and do great things."

"We will all work hard to push this team as far as we can," Handy said. "We are excited to get going with practices (Thursday) and to do everything we can to bring out the best in our players. We are going to build on the foundation we set last year and continue to take this team to another level, pushing the envelope as far as we can."

With the addition of ACHA DII national champion New York University and Syracuse to the ESCHL this year, the playoff picture is even more daunting.

They will get a chance to test their mettle next weekend when Handy and his staff will put them through a military-styled Warrior Fellowship training bootcamp.