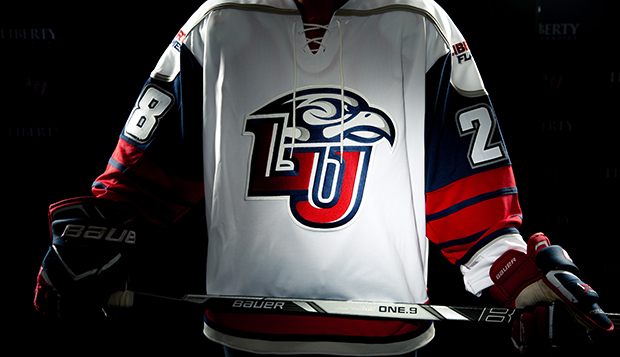 Liberty's new home jerseys for all five of its hockey teams display the Flames' logo prominently on the front.

Uniformity will be the theme for Liberty University's five ACHA hockey teams starting this fall, as its Division I, II, and III men's squads and Division I and II women's clubs will sport the same white home and navy away jerseys, designed by K1 Sportswear out of Minnesota. The DI men's teams will have an alternate third jersey to be revealed at the start of the spring semester.

"We're really excited about the new design, which features the throwback lace-up collars," said Kaleb VanDePerre, who heads up Club Sports' marketing projects. "They're high-quality, not too heavy, and will keep the players comfortable and maneuverable."

Players on all five teams did not see the new uniforms until they were released today via social media during this week's tryouts at the LaHaye Ice Center, and they will be first unveiled live to the public when the Lady Flames' Division II and Division I teams host the Hamilton Hawks this Thursday and Friday nights, respectively.

"This will be the first time in a long time the teams have had the same uniform," Liberty Division I men's Head Coach Kirk Handy said. "It's a great look for the team and an exciting time for the program."

There will be subtle differences between the teams, including different gloves between the men's and women's players. But for the most part, the five teams' uniforms will be identical.

"We were able to add a few more stripes and a gray and red outline around the bottom of the jerseys," VanDePerre said. "They look pretty sharp and it really worked out because we put a new center ice logo in (the LaHaye Ice Center) this year and purchased new jerseys. It helps build some buzz and creates an exciting brand for the next chapter of Liberty Hockey."

The new alternate third jersey, which has red as the primary color, will be unveiled for the first home series after Christmas break on Jan. 19.