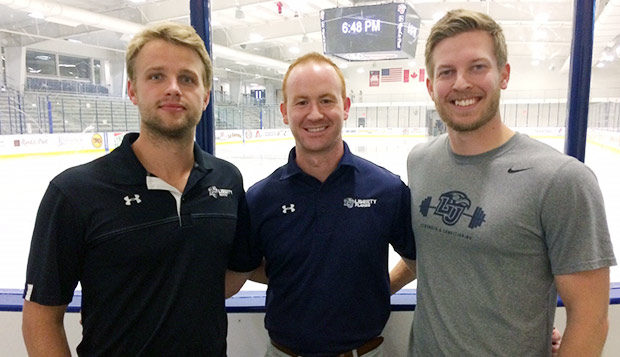 Head Coach Ben Hughes (center) selected Danny Logan (left) to develop the Flames' forwards while Blair Bennett (right) will work with the goalies and defensemen and serve as the team's strength and conditioning coordinator.

"Both are huge assets and have been a part of the program for a number of years," Hughes said. "Both are really good players and have really good knowledge of the game. They are also both really good character guys who have a heart for Liberty Hockey and a heart for the players they will be coaching. (They) are bringing a lot of value to the table to round out the staff."

Bennett, who completed his master's degree in Exercise Science with a concentration in Human Performance this past spring, has coached goalies for the DI women's and DII men's squads and served as a graduate assistant in strength and conditioning in recent seasons.

"I learned a lot from Lowes and Mike Morrison," Bennett said. "I played for them and they gave me an opportunity to mentor underneath them."

He will serve as the team's strength and conditioning coordinator and work with the goalies and defensemen while Logan will focus primarily on developing the Flames' forwards. Hughes will oversee all phases of the game, complementing Bennett in training the defensemen, his natural position.

"It's going to be a total team effort between the three of us," Bennett said. "As young coaches, it's going to be a bit of an adventure, but I think we're all good hockey minds and we can bring it all together."

After playing for the Flames for the past five seasons, the first four at the Division I level, Logan, who is pursuing a master's degree in Sport Administration, is looking forward to the challenge of coaching.

"This will be my first coaching experience and I'm super excited about it," said Logan, who also serves as event coordinator at the Liberty Mountain Snowflex Centre. "This is a new chapter and opportunity and I'm really blessed to be able to work with the DII team along with Bennett and Hughes. There was a lot of turnover with several seniors graduating last year, so it's a new team with new expectations."

After finalizing their DII roster this Friday, the Flames, who reached the past two ACHA DII National Championship games, will begin defense of their first Mid-Atlantic Collegiate Hockey (MACH) title with a regular-season opener, Sept. 22 against South Division rival Virginia Tech at the LaHaye Ice Center.

"I'm excited about the guys we have coming back and what I see from the incoming players," Bennett said. "We're going to turn some heads and surprise some people with the team we have. We'll set high expectations and the goal is always going to be returning to nationals and competing there as well."