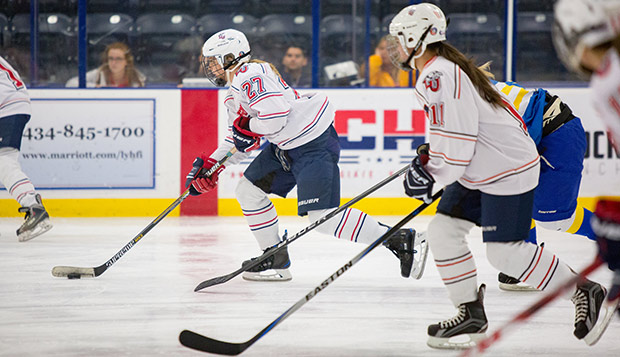 Sara Niemi has been at the helm of Liberty University's ACHA Division II women's hockey program for all but one season — the year it was added in 2011, when former Division I men's hockey captain Zac Bauman debuted as head coach and Niemi served as his assistant.

The expansion made Liberty the only school out of more than 400 in the ACHA to offer teams at all five classifications — DI, DII, and DIII men and DI and DII women — but it stretched the coaching staff.

Niemi, a former DI women's defensive standout and head captain for her senior season in 2010-11, has only had an assistant to work with in one of her five seasons as the Lady Flames' head coach — former DII defenseman Rena Leone, who served alongside Niemi for the 2014-15 season.

As the 2017-18 season approaches, starting with a Sept. 29-30 series at Miami (Ohio) University, Leone will be back on Liberty's bench as Niemi's assistant.

"Rena will be a great addition to our team's coaching staff as she has continued to be involved with hockey programs up in northern Pennsylvania these past two years," Niemi said. "I am excited to have her assist with running practices, engaging in game decisions, and becoming involved in our athletes' lives off the ice as well."

Niemi and Leone will welcome the largest recruiting class in team history later this month before tryouts are scheduled for Monday, Aug. 28, and Wednesday, Aug. 30 from 11:45 a.m. to 1 p.m. at the LaHaye Ice Center. The Lady Flames will host an exhibition game against the Hamilton Hawks on Aug. 31 at 8 p.m. before finalizing their roster on Sept. 1.

"With five freshmen joining our team this fall, I am excited for the talent, diversity, and enthusiasm coming into this season," Niemi said.

Liberty will bring in one defenseman (Sarah LaPorte, the sister of junior forward Grace LaPorte from Vermont), three centers (Brittany Hegele from Tennessee, Hope Barbera from Pennsylvania, and Alexis Early from Illinois), and one wing (Julia Hoffmeier from North Carolina).

Hegele played for the Nashville Girls Hockey travel program while Barbera played for the Westmoreland Lady Eagles and Early for the St. Louis Lady Cyclones.

Liberty will still be competing in College Hockey East (CHE) this season, but the format has changed with four games scheduled against the other four members of the league — Naval Academy, West Chester, Maryland, and Delaware.

"I am expecting our team to make the CHE playoffs this season as we were one spot out last year," Niemi said.

She also anticipates receiving the team's first bid to the ACHA Division II National Championships in Columbus, Ohio, by either winning the CHE Tournament or finishing ranked among the top six teams in the East Region. A total of 12 teams — six from the East and six from the West — make the national tournament field out of 46 ACHA DII programs.

"I know we can all do it and we will be spending a lot of time mentally and physically preparing for these goals this year," Niemi said.