Trio of wrestlers will raise competition from bottom to top 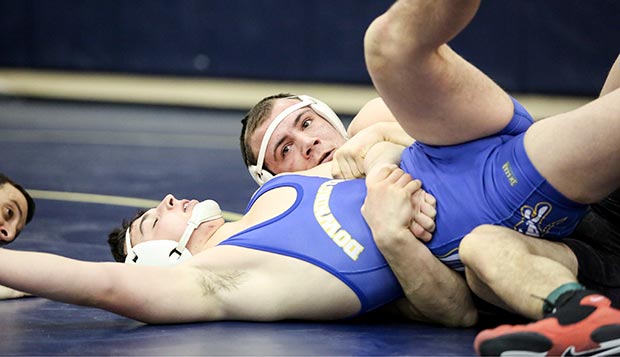 David Cox competed at 170 pounds for Oxford Area (Pa.) High School while being homeschooled in a family with four brothers and five sisters. (Photo by Nate Heckenberger/Digital First)

After landing two local lightweights early in the offseason, Flames Head Coach Jesse Castro has balanced his recruiting efforts with commitments from another lightweight from Georgia (125-pounder Keegan Smith), a middleweight from Pennsylvania (165-pounder David Cox), and an upperweight from Virginia (197-pounder Alex Hicks).

"No doubt, they are going to fit in right away," Castro said.

One of 10 siblings — he has four brothers and five sisters — Cox has always had plenty of friendly family competition growing up. That's one of the reasons he chose Liberty over NCAA Division I programs — the Flames are loaded with quality wrestlers at the middleweight classes.

"David Cox is going into the beehive of our lineup," Castro said. "That is where our depth is and that is what he likes. He wants to have competition. He will be going into one of the toughest weight classes at 165 and he will definitely thrive in that environment."

Cox, who plans to study in Liberty's School of Engineering & Computational Sciences, will contend for starting status with sophomore Ricky Cerebe, a returning all-American, and graduate Patrick Scarborough, who ranked among the best in the nation as senior before being sidetracked by a shoulder injury.

While he was homeschooled, Cox wrestled for Oxford Area High School near Lancaster, Pa., and trained with the Oxford Wrestling Club and Team Defiant, a mixed martial arts squad. In high school, he was a regional champion and two-time state qualifier at 170 pounds. He compiled a 94-13 record before competing in the National High School Coaches Association (NHSCA) National Duals in Virginia in the offseason.

Smith, who captured the 106-pound Georgia 2A state championship as a sophomore, finished runner-up at 113 as junior, and placed third at 120 pounds as a senior at Bremen (Ga.) High School. He concluded his high school career with a 148-23 record and has maintained his conditioning over the summer.

"I have been working out and practicing as much as I can so I am hoping the transition to college will go pretty smoothly," he said. "It has been a dream to wrestle at Liberty and I love the atmosphere and the coaching staff."

"We had a void at 125 pounds this past year, so having someone of his caliber come in fills an immediate need," Castro added. "He is definitely scrappy and pretty tough-minded. Technically, we can develop him. I think he's going to be a huge contributor to the program."

Hicks became Graham High School's third 2A state champion in as many years — and fourth all-time — this past season at 195 pounds. The two-time West Region champion concluded his high school career with a 156-33 record following a 48-1 senior season. He succeeded one of his best friends, two-time 195-pound state champion Dyson Cook, now a sophomore NCAA Division I wrestler at Virginia Tech.

"Another friend of mine won a state title at heavyweight, so it felt good not only to win, but to train with those guys, friends that pushed me," said Hicks, who expects a similar environment competing with the Flames.

"Liberty has a great program and I believe 110 percent in my coaches already," he said. "I'll be with a great bunch of guys. I have been to Liberty a few times and the guys I have talked to have done a lot to help me to be mentally prepared. I believe in myself and if I keep working, I believe we will win another national championship before I leave Liberty."

Hicks started as an undersized center for the past three seasons on Graham's football team, using his quickness and strength to block 250-pound noseguards. He plans to pursue a pre-med degree through Liberty's Exercise Science program and go on to chiropractic school before eventually becoming a team doctor for a high school football program.

On the wrestling mat, Hicks hopes to work his way into the Flames' starting lineup in the near future. Castro sees that as a realistic goal.

"Alex will add some depth there and be competitive, especially if (rising senior) Austin Amos moves up to 235," Castro said. "What I like about Alex is he has a great mindset. He doesn't overthink and he doesn't panic, and he doesn't fold after a loss. He'll rise and get back up and keep getting better. That kind of attitude is going to carry him a long way."