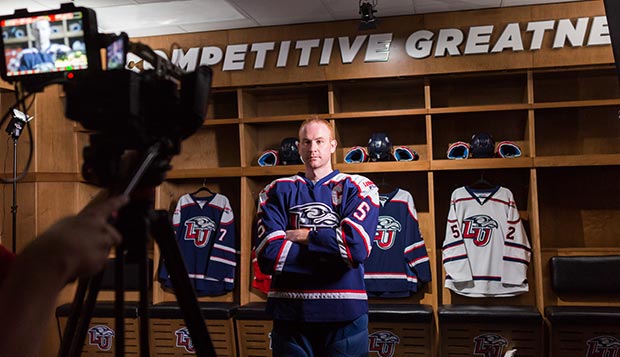 Hughes, who served as the ACHA DI men's head captain the past two seasons, is looking forward to the challenges of his first experience as a head coach.

"It's a little surreal right now," he said. "Honestly, I never thought I'd be this involved as a coach, this early. I thought at best this year maybe I could push pucks at one of the practices. It's definitely going to be different than what I've been used to playing here the past few years here, but I'm ecstatic, it's such a blessing."

The Jacksonville, Fla., native has found a home at Liberty over the past three years, where he earned a degree through the School of Business with a concentration in Human Resource Management last year and plans to complete his Master of Business Administration (M.B.A.) in December.

"Being at Liberty, and being in a community that I love, that's embraced me with open arms the past couple years as a player, as a student worker here, and just the level of comfort and ease of transition and having everyone come in and support me is huge," Hughes said. "It's a kind of a natural progression and it's cool to see."

He inherits a team that has reached the ACHA DII National Championship game the past two seasons under Head Coach Chris Lowes and Assistant Coach Mike Morrison.

"Chris and Mike did an unbelievable job and they're definitely huge shoes to fill," Hughes said. "The big thing they relied on and were able to build was a great sense of leadership and culture in the core of that team."