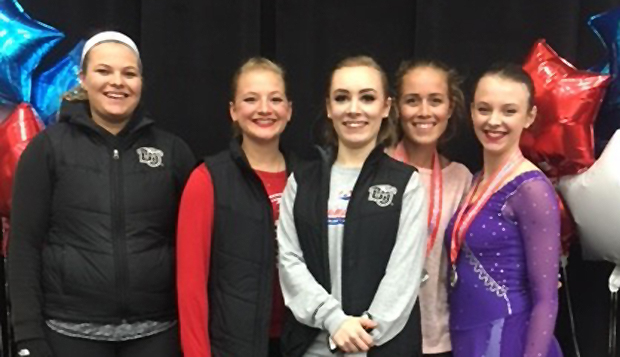 It was the Lady Flames' largest representation in the three summers that LU has sent skaters to collegiate nationals, and they came away with three top-six finishes, led by incoming freshman Angela Bosher who claimed a bronze medal in the Novice Ladies division.

"She was very pleased with both her short and long performances," Liberty figure skating Head Coach Dawn Harter said of Bosher, a graduate of Jefferson Forest High School graduate in nearby Forest, Va., who has trained over the summer with Liberty Associate Coach Tatiana Payne at the LaHaye Ice Center as well as with her personal coach in Hillsboro, N.C. "She said that was the best she has ever skated. She is a hard worker and that payed off in her competition. She showed the confidence that she can perform the way she has practiced."

"She is working on her transitions and flow in practice as well as on the stability of landing her jumps in performance the way she does in practice," Dawn Harter said. "All of our skaters are implementing new programs and haven't skated them for long, so this event gave them a good introduction to the intercollegiate competition season."

Also in the Intermediate Ladies competition, rising senior Emily Hautbois placed sixth despite nursing a fractured wrist that she injured in practice the week before at her home rink in Fairfax, Va.

"She was one of our developmental skaters last year and hadn't competed for a whole year," Harter said. "She has just been getting back on the ice and getting her feet under her. With her cast on her wrist, she had to deal with balance issues and a little hesitation, not wanting to fall and land on that same side. But she has a lot of theatrical performance in her and that added to her point totals."

Skaters were scored with International Judging System standards, which factored in more elements of their routines, including technical and artistic merit, using a 6.0 scale.

"I'm proud of the girls for representing our program and reaching out to other athletes while we were there," Harter said. "We look forward to seeing them on the Eastern Sectional Collegiate circuit when we go to competitions."

The Lady Flames will be traveling to all three of their sectional events in the 2017-18 season, starting Nov. 11-12 at New York University. Harter anticipates a team capable of improving on last season's fourth-place finish and contending for one of three bids to the Intercollegiate National Championships in Denver, Colo., in April.

"Angela Bosher is one of 12 new skaters we have coming in at various levels — from pre-preliminary all the way up to the junior level — and a lot more will be doing both synchro and figure skating," Harter said, noting that she plans to keep around 20 figure skaters on her competitive team, about the same total that Payne will have on her synchronized skating roster. "They've been working hard and getting stronger, and I'm looking forward to seeing what we have for tryouts on Aug. 27."

"They have been keeping each other accountable through text messages, through training and eating right, so that after this weekend's performances, they didn't feel out of breath," Harter said. "Now they've got to work on the mental toughness so that when they come out on the ice, they can be confident and not let their nerves get the better of them."